A day with Tomaž Kavčič

As usual things happen by chance. Those of you that follow my Instagram and Facebook stories will know that I’ve been preparing my team’s Christmas lunch. Yes, that’s right, I’m not getting ready for Christmas 2019, we’re going to be celebrating last year’s Christmas!

A particular choice, but not original after all, because diplomats always meet in January to celebrate the Holidays. December is always a very busy month for everyone!

That’s how this story starts.

We had originally chosen the 20th of January for MissClaire’s work group event, in Tomaž Kavčič’s wonderful restaurant, Kruh in Vino. We had to revise our plans though, or Tomaž would not have been there to welcome us, as he was expected as a guest at an event in Alta Badia, so the lunch is moved to the 27th J

But that’s when the interesting part of the story begins because I then received an invitation to spend an entire day with the most popular Slovenian chef. Flavia Furios, his wife, called me and asked: “Chiara, would you like to travel with Tomaž to Val Badia on the 20th of January for the event Sciare con Gusto?». What do you think I answered? Yes, yes and yes.

It’s now 8 in the morning and I’m in a parking lot in Gorizia waiting for the chef. He is 7 minutes late, but he excuses himself as soon as he steps out the car: the day before he had a wedding in Ljubljana, an incredible dinner at the opera house of the Slovenian capital with Umek (a famous dj producer) and his wife Senka.

I really didn’t have much to say as the evening before I had prepared a dinner of sliced bread and hummus I’d found on offer at the supermarket. I quickly get into his lovely Mercedes, aka a super technological space shuttle. I immediately congratulate him on the car, but he just answers that it’s not his: “I’ve been a testimonial for Mercedes in Slovenia and Germany over the last four years and about every four months they call me to change model and try a new one”.

Tomaž is really down to earth and he’s keen to specify everything so we don’t just assume things about him; it almost seems like he tiptoes around, not a person that arrogantly stamps his heels down with presumption.

The trip is quite long, but we chat incessantly all the way. His Italian is very good, so I ask him a few questions like “What memories do you have of when you were a child?”.

Without giving it a moment’s thought he answers “Tuesdays – when I was about 4 years old I would come to Gorizia with my grandfather. Do you know how many farmers there were here? A huge amount! We would usually buy a ham, because at the time our restaurant was a traditional Gostilna and at the counter we’d sell over 400 litres of wine and a ham a week. But it was so good!”

Once – he carries on – the premises were completely different as were our lives and habits! Buses of state employees would drive up bringing hordes of workers; When they stopped here after work they always used to drink a glass of wine each. And someone would take turns paying for everyone. With this routine they’d each go through a litre a week! After that they wouldn’t go out to party, they’d go to work in the fields”.

In between a story and the next his phone keeps ringing: it’s people calling to book a table at the restaurant which today (Sunday) is already full. He’s a little sorry to not be at the restaurant today because he tries to be there all the time. “I called everyone who reserved a table and warned them that I wouldn’t be there, because I was attending an event. I know the restaurant offers an impeccable service even if I’m not there, but it’s right to inform people! Usually he organized events and dinners on the closing day of Pri Lojzetu.

We’re driving quite quickly, Tomaž likes to drive with a little sprint, maybe because speed is part of his past? He used to be a Moto Cross champion in Jugoslavia and after that he did lots of rally (whoever loves cars is really keen to drive along those twisting mountain roads… but I’m not so sure how the dessert in the trunk is going to survive, I wonder if it will make it to the chef’s presentation!).

He tells me a little about the events he took part in and the people he met, like famous cinema and tv actors, politicians, some well-known, some a little less. We started talking about his Gostilna and now we’re back to the present… what a journey!

He tells me that when he was a young boy, one of his duties was to clean out the ash trays, a difficult job because in the dining room which had only a few tables, the air was always thick with smoke. When the law passed to ban public smoking, his mother was very worried, she thought they’d lose a good amount of customers. But nothing went wrong in the end.

Our chat stops here because we’ve arrived at our destination, the cable car of Piz La Ila that will take us up to 2000 meters; Otto, the owner of the Bamby mountain house, will be waiting for us at the top, with his snowmobile to drive us to the Bamby. That’s where they are hosting a part of the tenth edition of Sciare con Gusto. 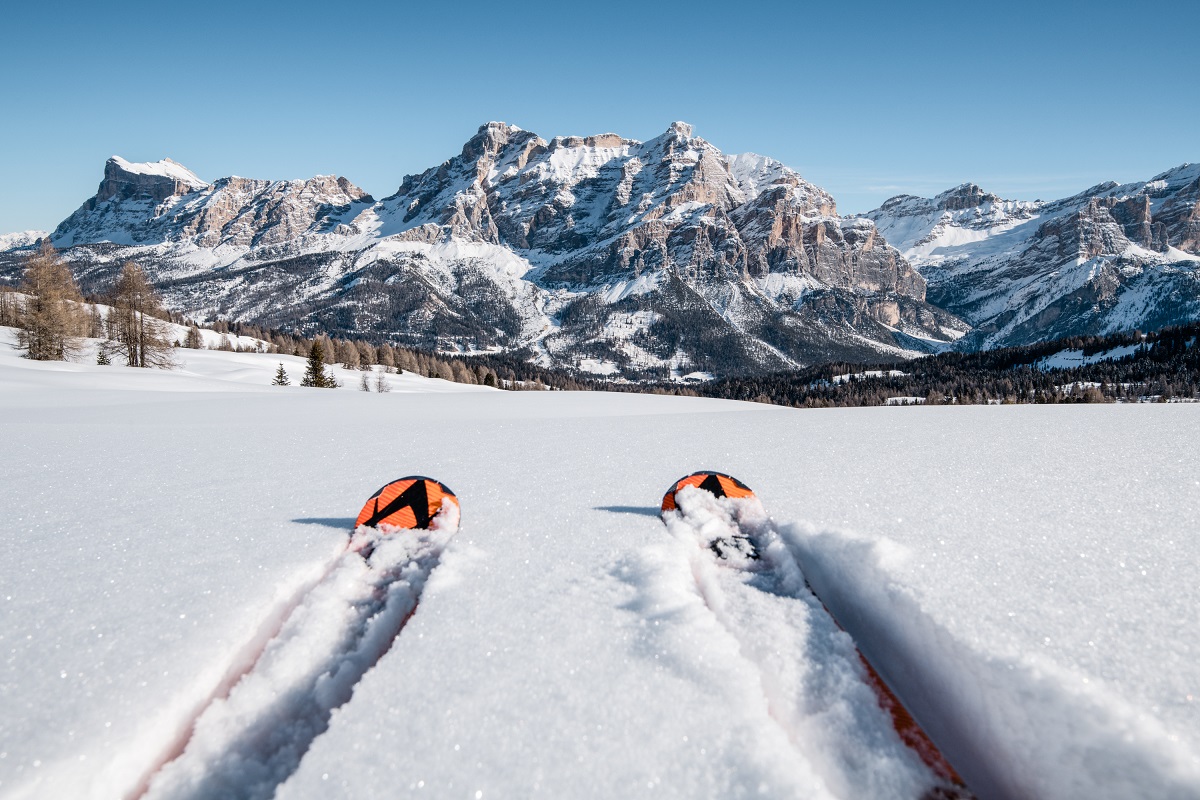 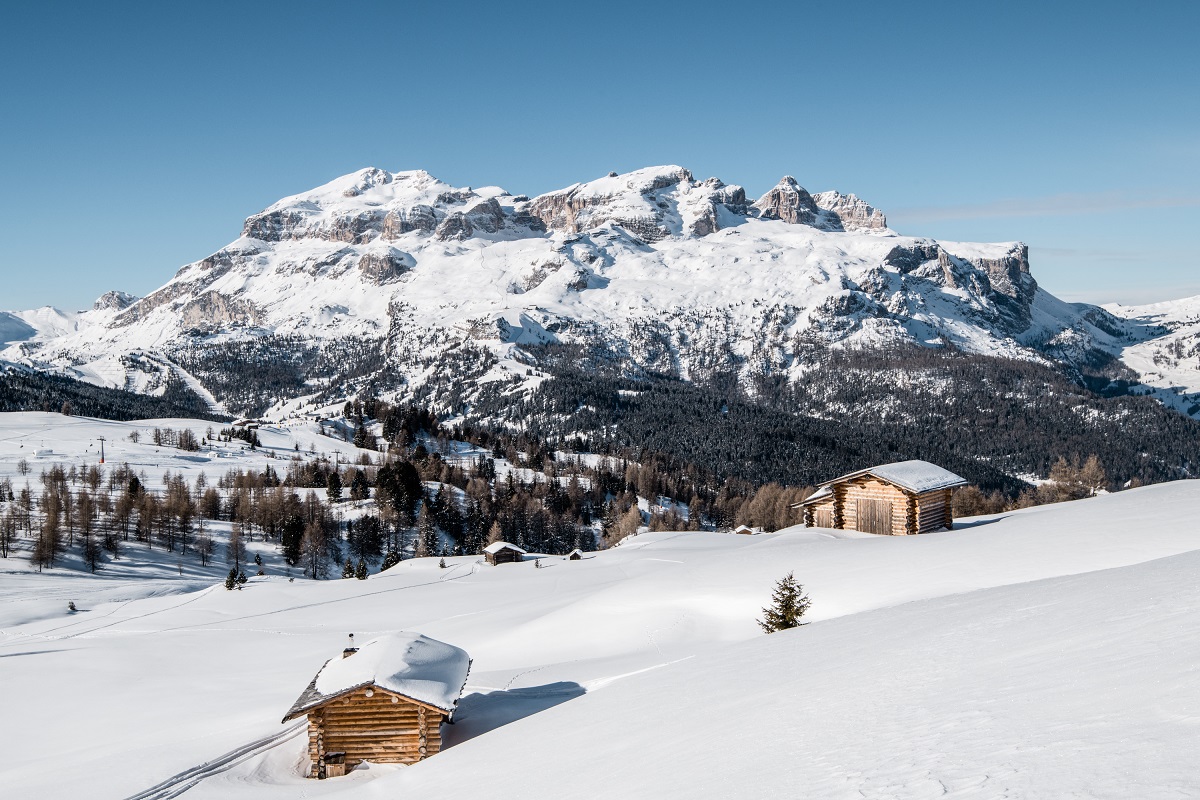 I wrote the entire list down so if you happen to pass by here before the end of the season you can try one of their creations.

But let’s get back on track, shall we? Once we arrive in Ütia Bamby it’s time to explore the location, to understand the area reserved for the event, get to know the staff and the kitchen and set everything out for 2.30 pm, when we expect our guests to arrive. 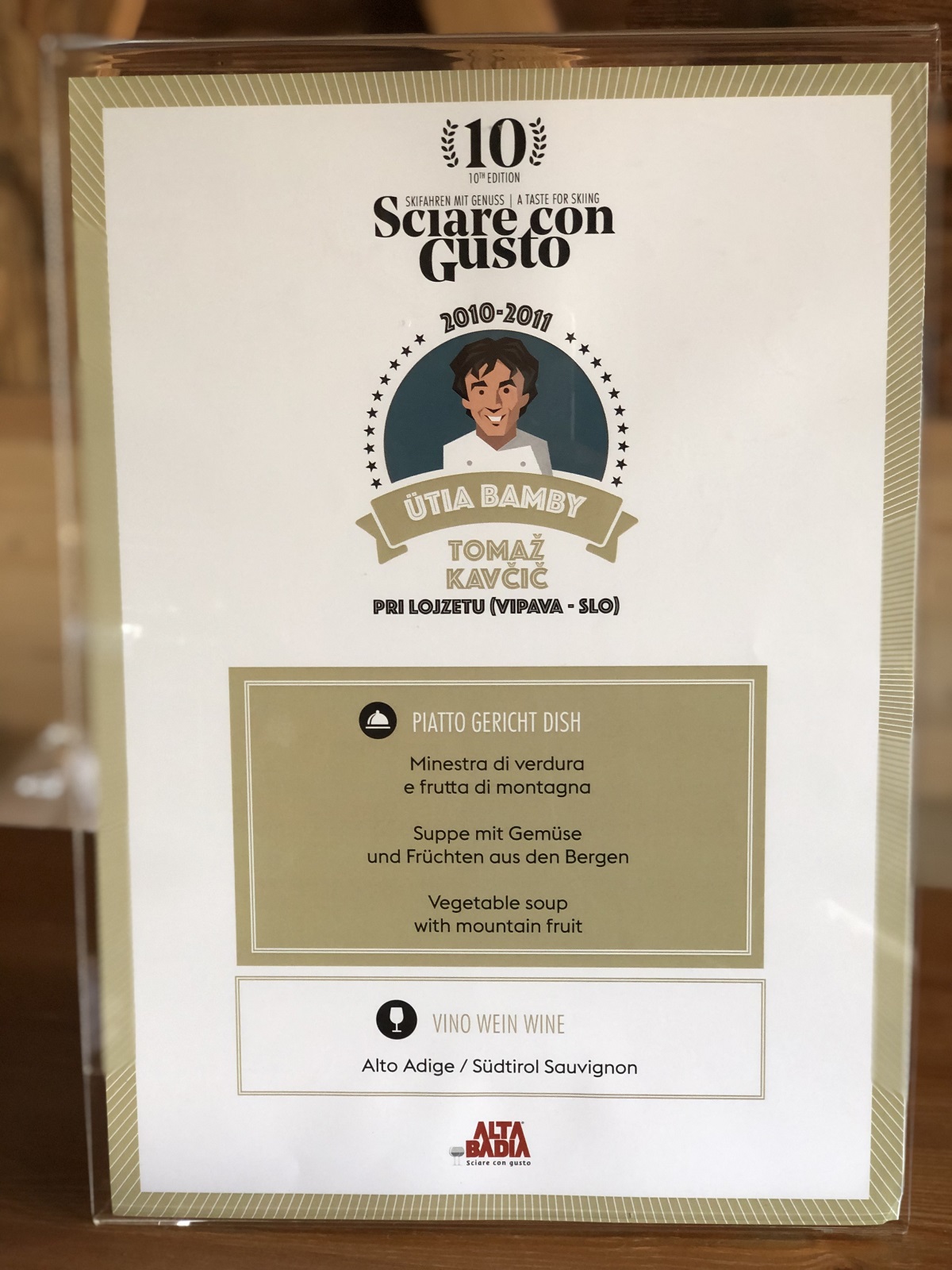 It’s lunch time and there’s a wonderful goulash smell in the air… I’m starting to feel very hungry. We’re sitting outside in the sun, enjoying the wonderful day, our lunch break is really special (even if I keep being interrupted every few minutes by Tomaž’s ever-ringing phone!) 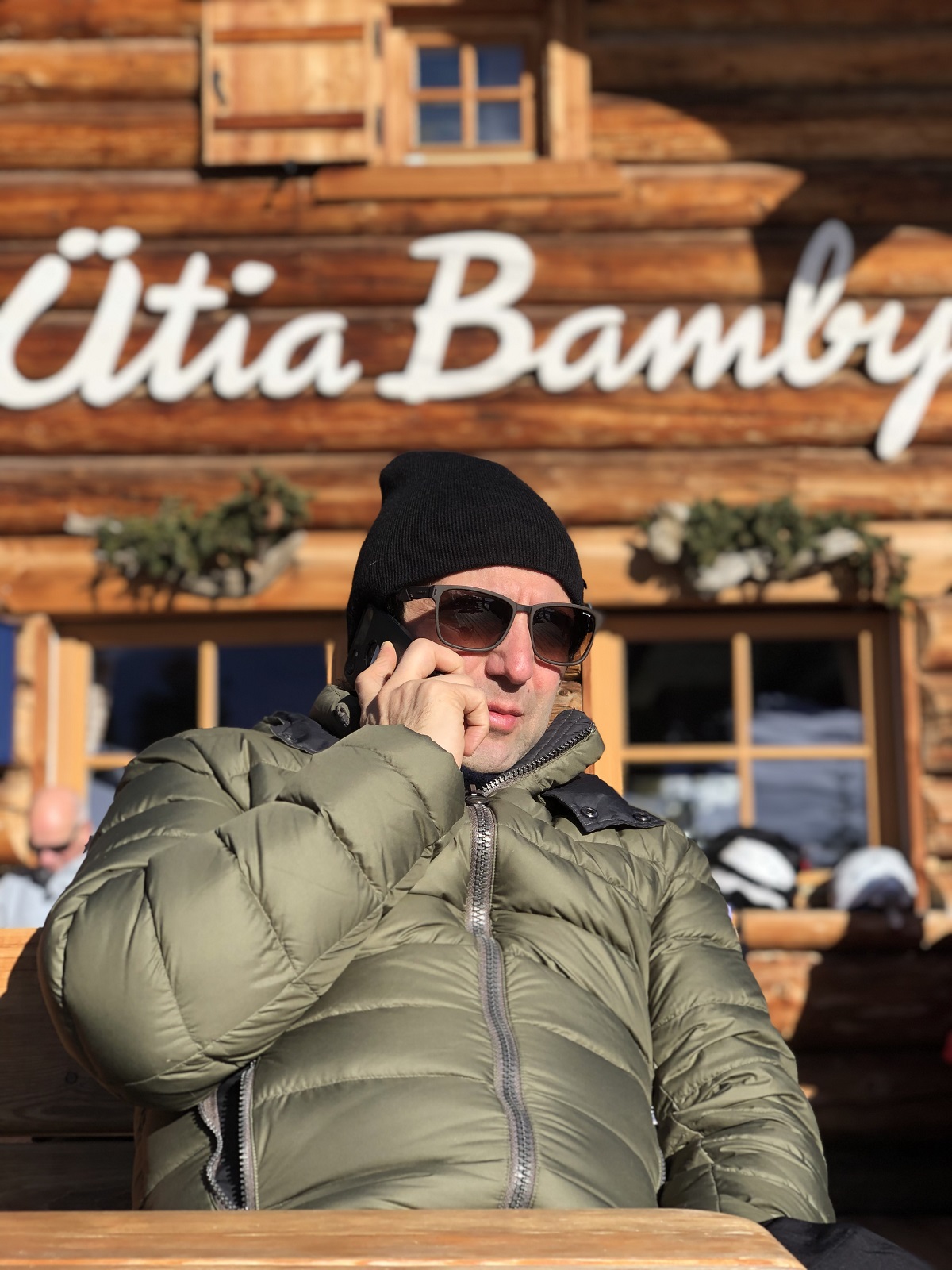 It’s not a problem for me of course, I just marvel at how much work goes into his job. I also can barely imagine that last night he was at a wedding with 140 people, went to sleep at 5.30 am and at 8 o’clock he was already getting in the car. What a hectic life!

You can talk to Tomaž about anything, from family to work, friendship and troubles; he’s a very open and humble person, he always stops for a word when he meets someone he knows, or a handshake with someone he only just met.

He’s also a very positive person, a quality I admire a lot. He always prizes the people who work with him and never criticizes others.

But careful now, the guests are arriving! The excitement and frenzy last about an hour. Tomaž is wearing his chef uniform and starts serving his dish; he carefully explains how to prepare everything… showing all his passion!

The guests are waiting and it’s a flurry of photos, videos, explanations and descriptions; he sits at the table with them to chat a little, whether they are journalists, bloggers, influencer or simply guest… he behaves the same with everyone. 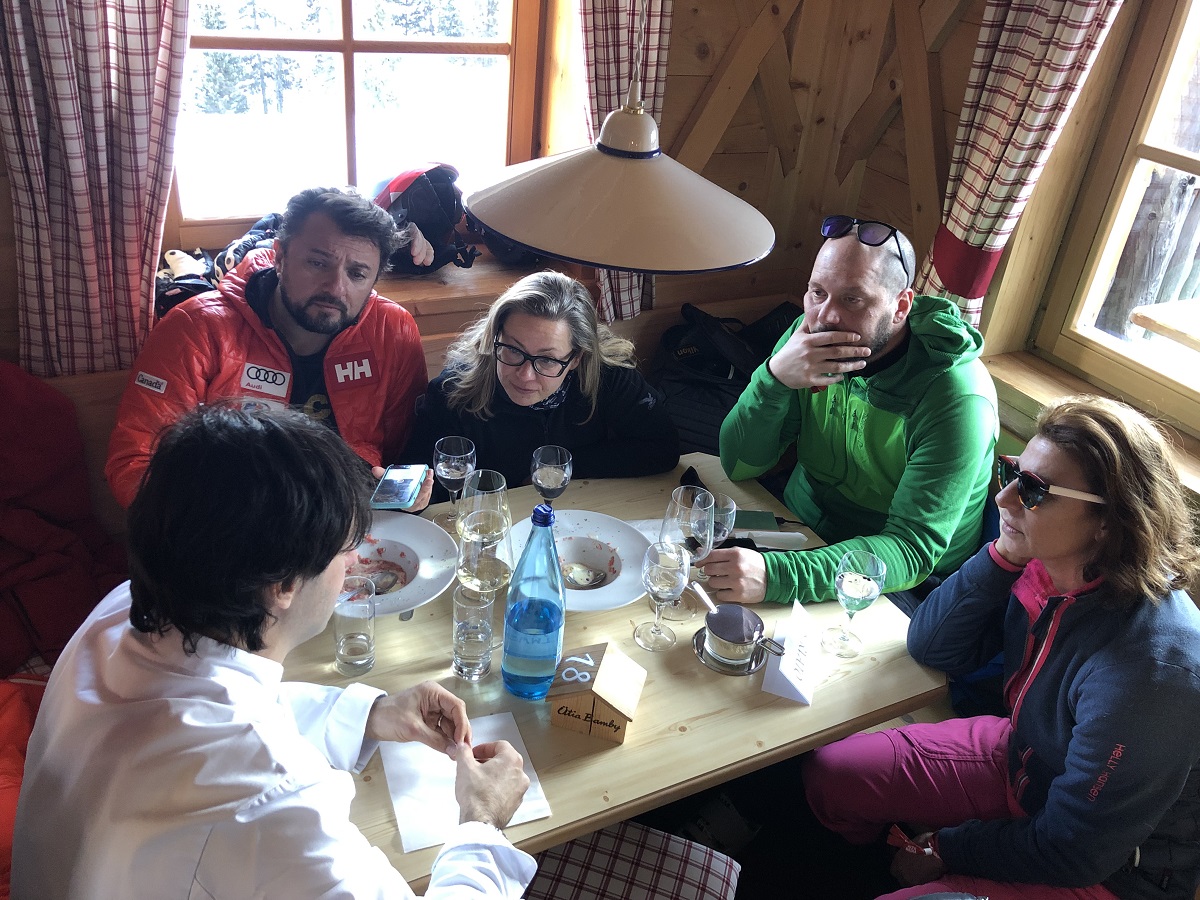 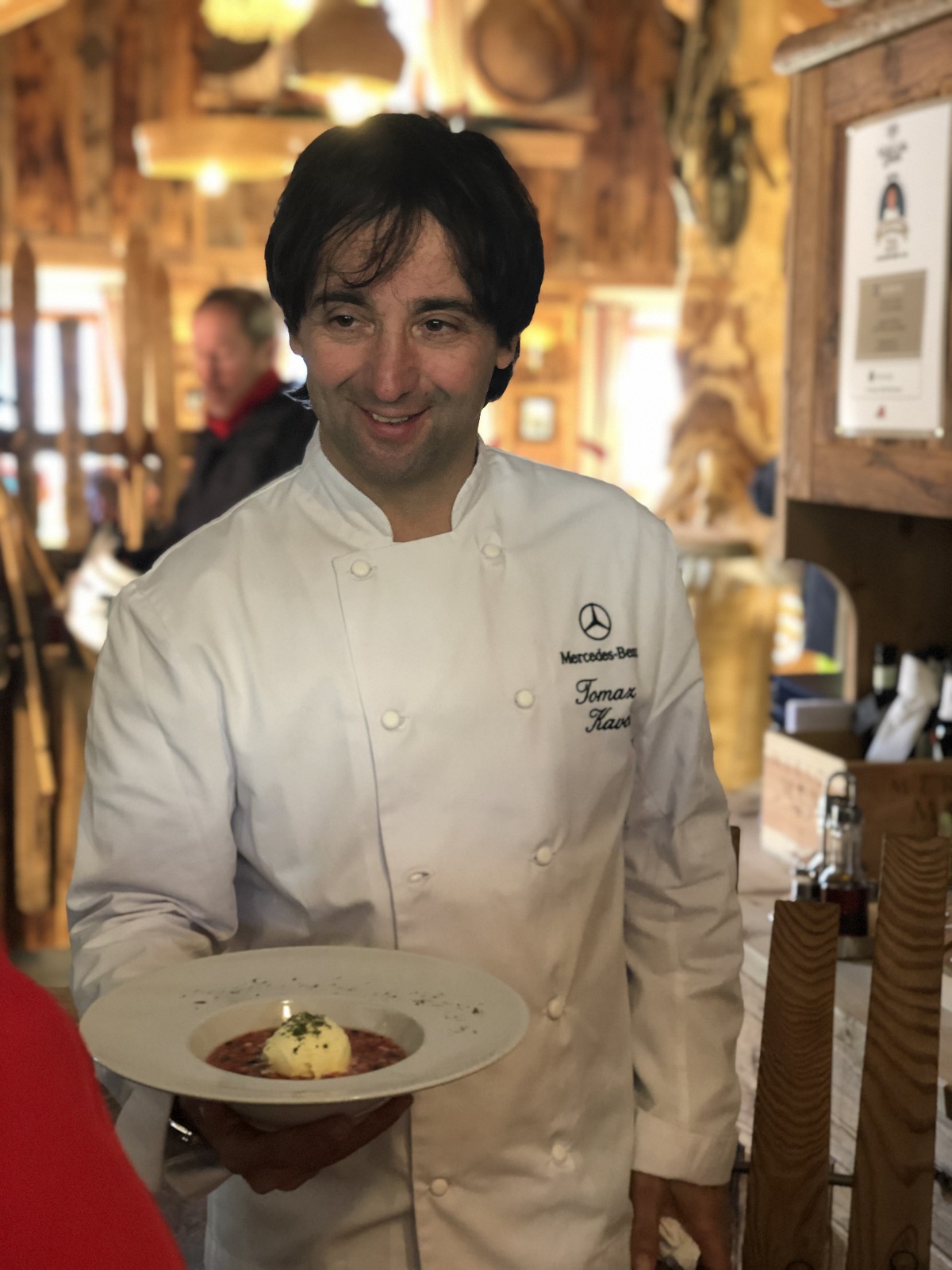 And then. Then it’s time for Gin. Because Tomaž and Fructal have worked together to create a delicacy that he wants to present to his guests. Someone asks to have it with coffee and he agrees immediately to this experiment. He actually orders the coffee himself. That’s just how he his, generous and humble. 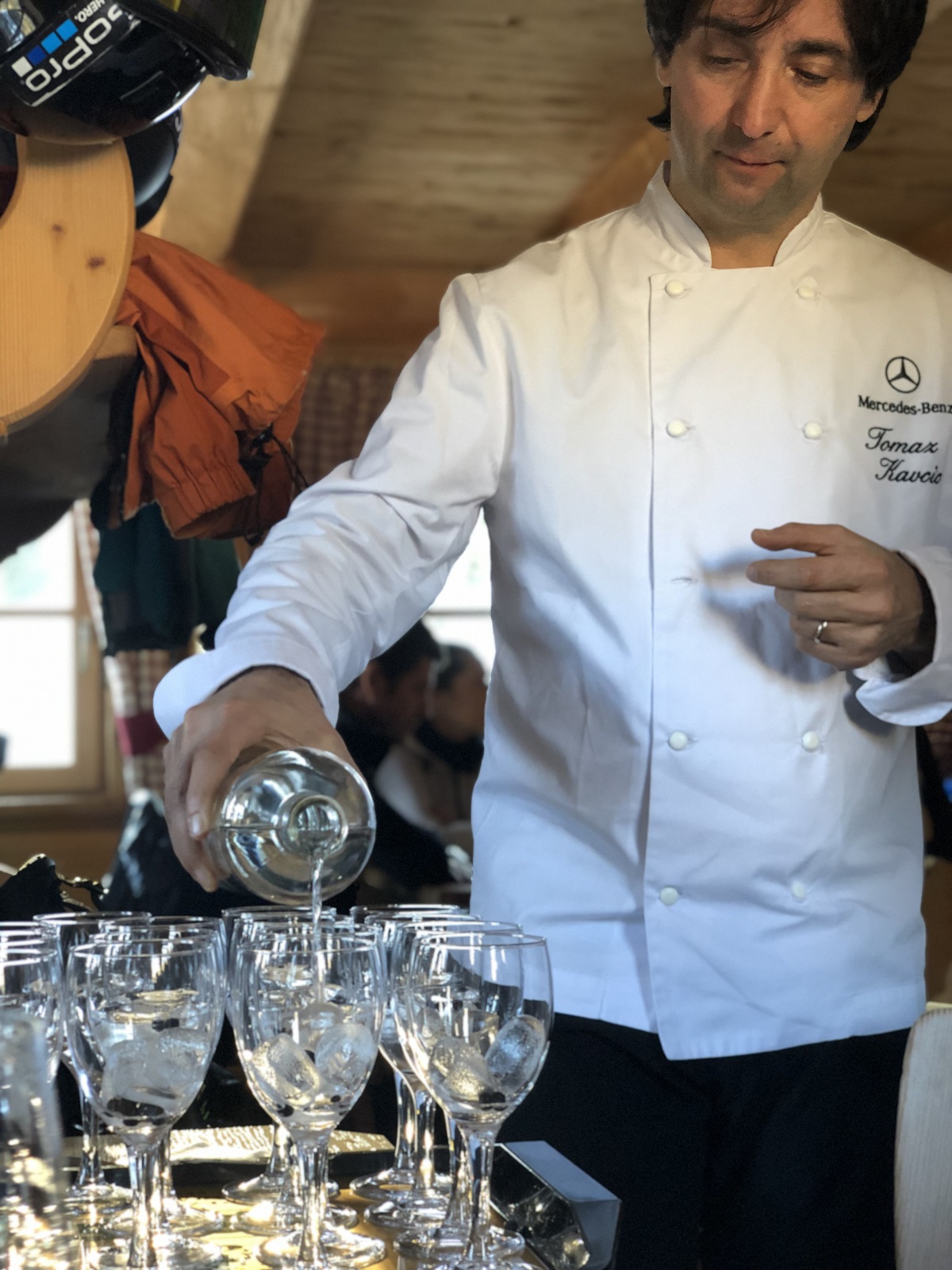 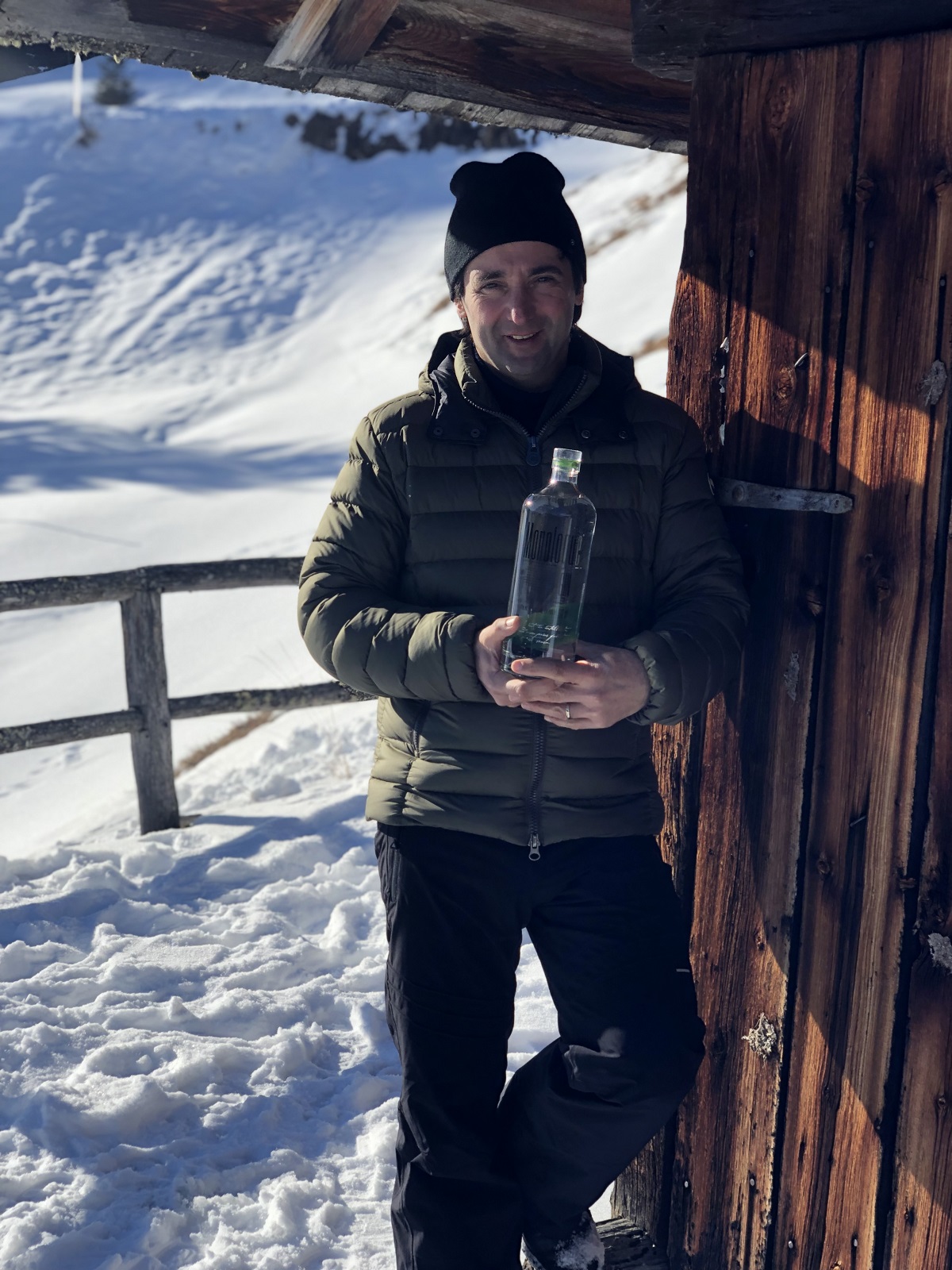 Then the curtains close. The last cable car leaves at 4.15 pm and it’s now 3.30!  we just have one last stop, we go all together to the Moritzino, to dance about a little, have a last glass of wine and head off!

I wonder how we’ll make it home, because I’m just so exhausted now, just as the moon is coming out through the mountains, but the chef gets into the car and says “this is not the right moments to drive back, the roads will be packed, let’s go to Corvara for an aperitivo!”. How can I say no? 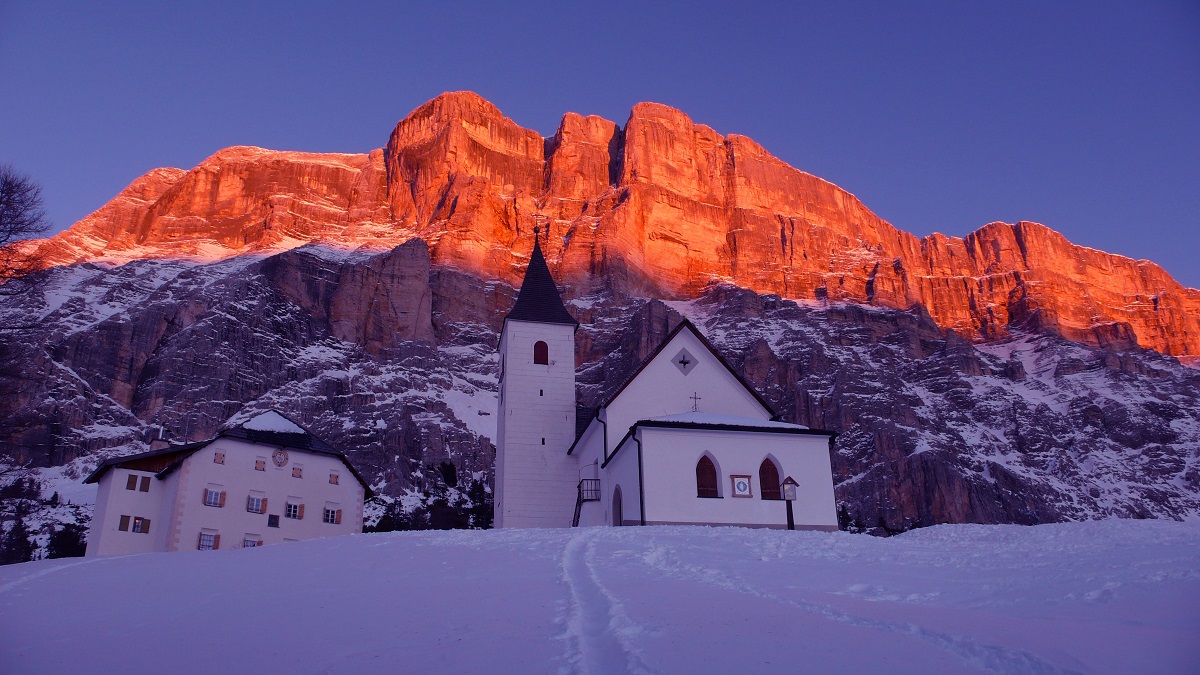 I’m sure I gave him a shocked look. He’s at least ten years older than me, has slept just a couple of hours, drove all the way, worked … and now he’s ready for an aperitivo before driving back? Madness!

As we drive back he keeps receiving phone calls, this time from family and friends. Because he always finds time for them, whatever he’s up to.

As we’re in the car and almost back to Gorizia I decide to start a live Instagram story. I tell him that I’ll dedicate an article to this lovely day, telling everyone what goes on in a chef’s day.

“Yes – he says – my work is really nice, and at the end of the day I’m really satisfied. If you work with all your heart, it doesn’t really matter if you only slept three hours. It doesn’t matter because we just had a new and exciting experience, met lots of new people and we got the chance to share my idea of cuisine. In a dish I don’t only look at the food, I look at the idea, because I love the story behind it. But careful, because every story has to have good substance!”

“This is not only my job, it’s a way of life; if this wasn’t my job I wouldn’t have the opportunity to spend such an incredible day, and I always try to think that what I do is part of my life style. Positive, beautiful and always decorated with a smile. I’m tired, but I’m very happy”. 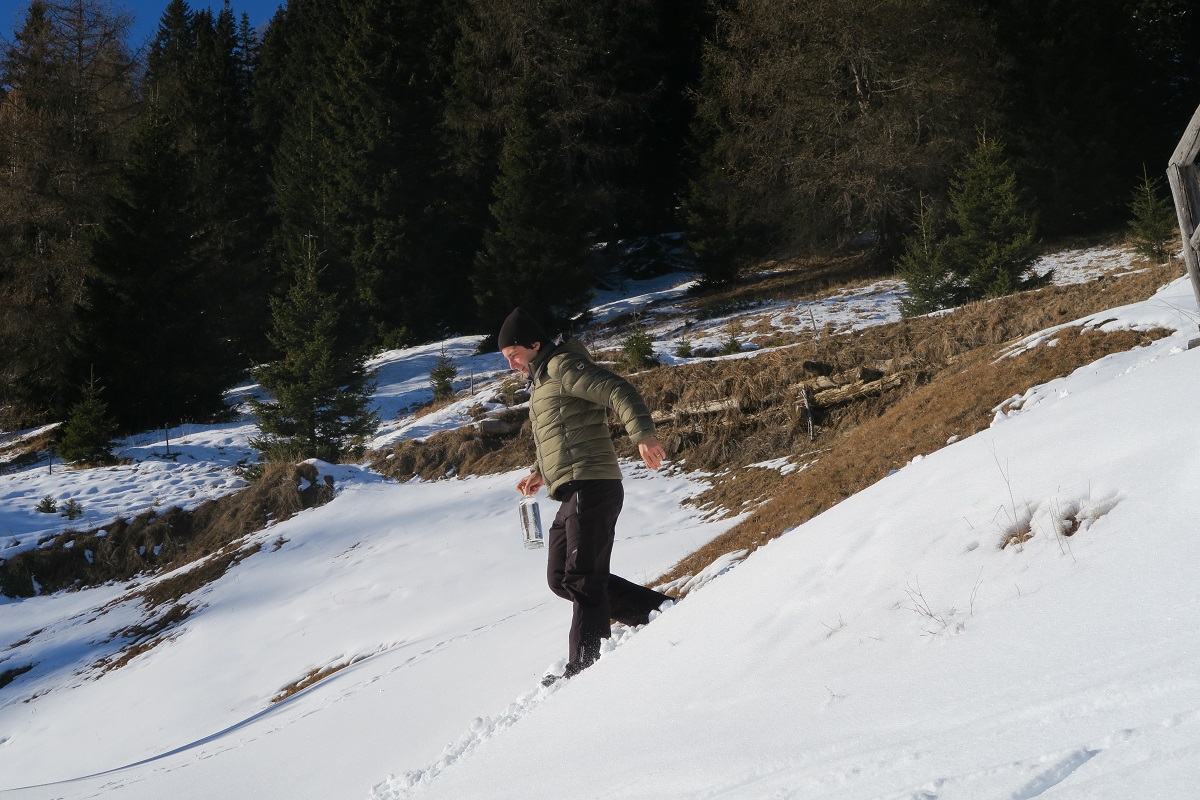 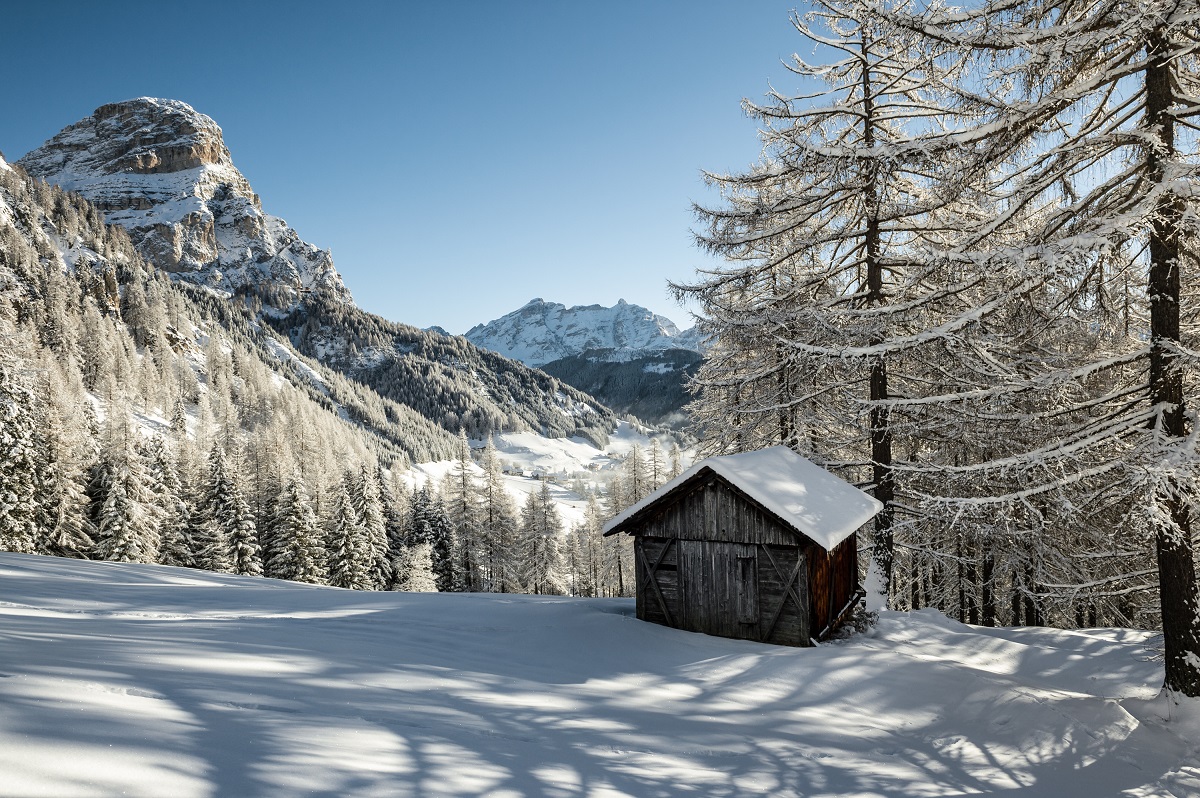 My special birthday at the Savoia Excelsior Palace