Carnivals of Friuli Venezia Giulia and of the Mitteleuropa

Events and parades to not miss

As every year, Carnival returns to fill the town streets with colours, not only in Friuli Venezia Giulia, but all over Europe. I decided to write to you about a few of these events (not all of them unfortunately, I casually selected a few festivities) from my Region, as well as a few from countries of Mitteleuropa. Let’s start! 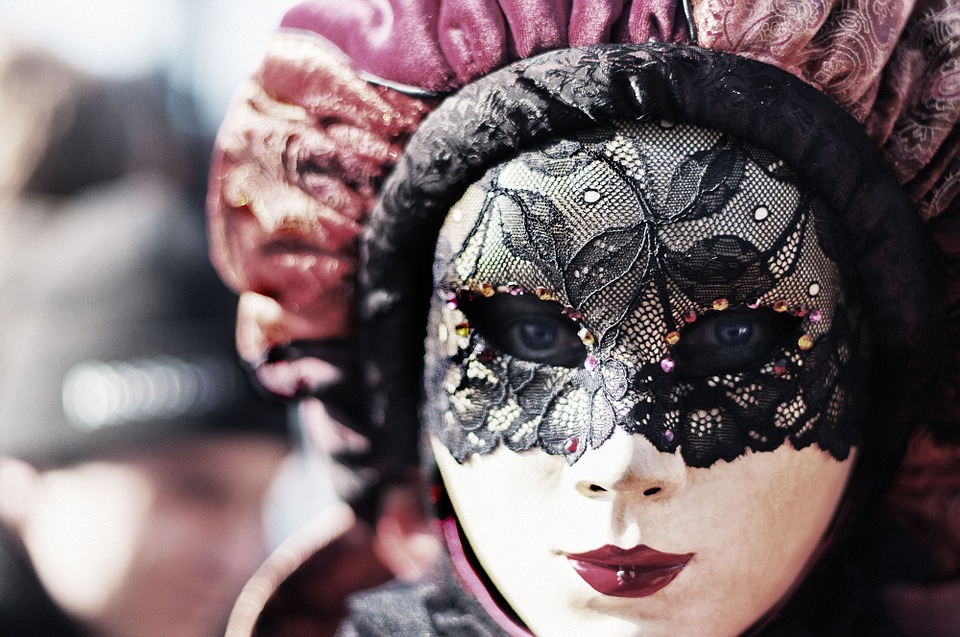 The small town of Opicina (TS) hosts the Kars’s Carnival – Kraški Pust, that is now at its 50th edition. An event that starts on Thursday the 23rd until Saturday the 25th of February, when at 2pm they’ll be having the grand parade. There are lots of other events on the calendar for Opicina’s carnival. Here is a preview of the themes for the parade:

A delegation of masks and costumes from Trieste took part in the European Carnival, that this year was in Wolfsberg, Austria, from the 19th to the 22nd of January. And on that note the preparations for Trieste’s Carnival have started. In the last years the celebrations have become enriched with collateral events, but it also managed to preserve the tradition of the neighbourhood parades, by recovering the traditional Servola Carnival, which is a testimony to the great event. This year Trieste’s Carnival will start on the 23rd of February and end on the 28th with the well know city parade.

Starting Thursday the 23rd, until Tuesday the 28th of February 2017, the 64th Carnival of Muggia will be celebrated. The most anticipated moment is on Sunday the 26th when there will be a parade of allegorical wagons, fruit of the patient work of many passionate artisans and volunteers; Muggia’s carnival, or the “mad carnival” is always young and fresh thanks to the many young people that are always at the heart of the events. It’s a moment for celebration but also for culture, because the origins of the carnival date back to the 15th century, and creativeness and skill goes into the building of the wagons as well as the costumes. Along with the wagons, about 200 people in costume are taking part in the parade. The historical companies will we parading: Bellezze Naturali, Bulli e Pupe, Bora, Brivido, Lampo, Mandrioi, Ongia e Trottola that with their artistic talent and Goliardic spirit, keep the magic and spirit of carnival alive

Resia Carnival – Pust, precessions and the funeral of the Babaz

From the 23rd of February until the 1st of March 2017, in Saint George of Resia (UD) they celebrate the Pust – their local carnival; days of fun and games where everyone takes part dressed in the typical “Lipe bile Maškire” (the white masks) or simply as “Babaci” or “Kukaci” (old and shabby clothes). The air is always filled with music and typical dances. The celebrations end on ash Wednesday with the Procession and the funeral of the “Babaz”: in the late afternoon, after a proper delirious procession, a puppet called “Babaz” is burnt in the square. He is the main character in the Pust and represents all the excesses and foolish behaviour of the carnival season.

The Nimis Carnival ends with the “Grand Parade” of the 26th of February, when a great number of wagons and groups of participants will liven up the coloured and festive event. The event end with Pust returning to his cave where tradition says he is hidden all year round. The Pust, a puppet that symbolizes folly, the “absence of rules”, is usually kept in chains and freed to create havoc and mischief only in this period of the year.

Gorizia Carnival and the funeral of the king of Carnival

A very long event, that starts on Sunday the 19th of February and continues until the 1st of March 2017 in Gorizia. The party reaches its peak when groups and wagons parade along the city streets. The Gorizia Carnival ends on Monday the 1st with the Funeral of the King of Carnival. Following tradition, the Funeral’s procession runs through the main city routes, accompanied by cries and shouts from the masks. Anticipated by the sound of the bass drum the procession ends when it reaches the Baiamonti stadium where the king of Carnival will be cremated and his testament will be read.

Carnival in the main square in Udine

The “Night of the Lanterns” is the main event in Surano’s Carnival (der Zahrar Voschhankh), which is one of the oldest Carnival in the Alps that starts on the Saturday before ash Wednesday that this year will be Saturday the 25th of February. The masks all meets up in the square of Sauris di Sopra, accompanies by the two figures of the Rölar and the Kheirar. After a tour of the town, the group of masks, followed by the public, walks into the woods and follows a night time rout, lit by lanterns that all participants can rend before the beginning of the parade. The rout crosses wood and fields covered by snow and stops by typical stone tables where you can warm up with mulled wine. 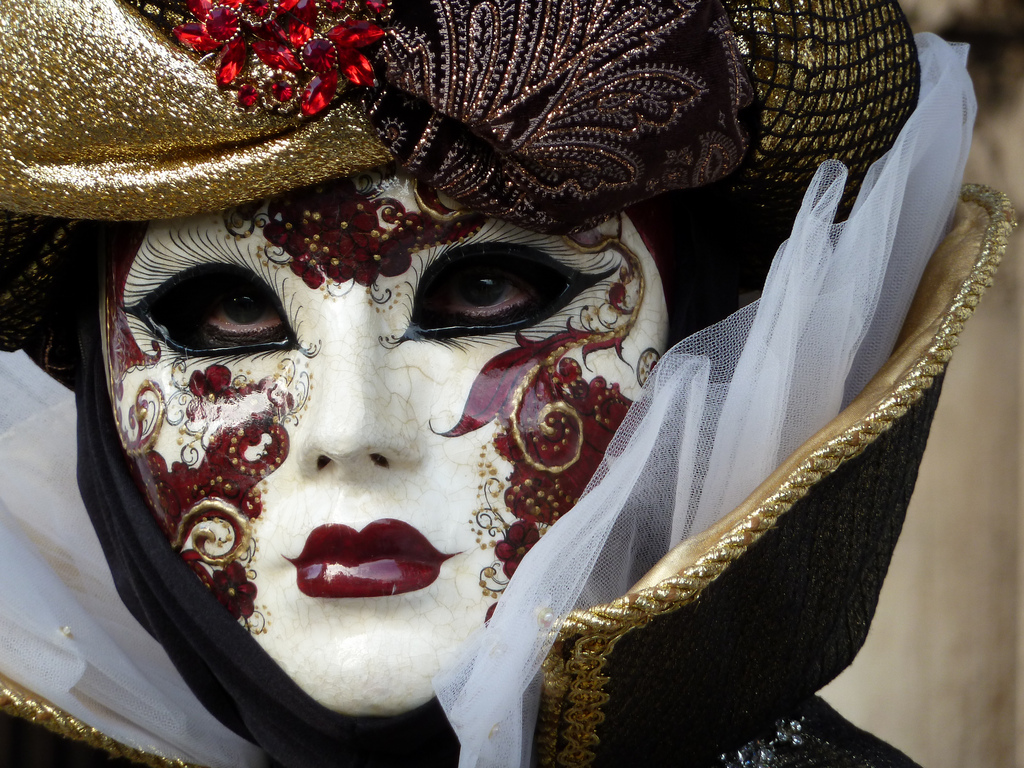 For further information on other Carnival events of FVG I suggest you take a look at the web page GIRO FVG that is always updated with the latest events.

After a quick tour of the region I move to Mitteleuropa to tell you about a few events in Slovenia, Austria and Croatia.

Even in nearby Slovenia they celebrate Carnival, and I suggest, if you’re intending to take trip, or a day tour, to take part in an event which takes place in Ljubljana, so you can spend a different Carnival. The tradition here is a parade that takes part along the main streets of the centre, with entertainment in the Kong. Also the masks of the pagan tradition take part in it, like the kurent, the laufar, the morostar and others.

If your in the area of Ptuj you can’t miss Slevenia’s most important Carnival, tied to antique traditions, where the masks of the “Kurent” open the doors to Spring, in one of the main festivals of Central European ethnological tradition. The Kurent are dark and mysterious animal costumes, complex and heavy masks in sheep skin with cow bells, coloured socks and boots, large fur head ornaments decorated with feathers, branches and horns.

The main events in Austria take part in the area of Tyrol, so not really close to our area. But just a few kilometres from our border there’s…. Villach

The “Villacher Fasching” has antique routes, you can find record of it already in 1867, and it has a particular mask, the Villach jester, that is even city banner. On Saturday the 25th of February, Villach opens its doors to thousands of costumes from all the Aple Adria area as well as Italy, a real invasion of good mood that fills the streets of the historical centre. At the stoke of 2pm, the parade with the Prince and Princess of Carnival starts. 150 groups and about 3.000 masks from the nearby towns and the boarder countries fill the city centre, bringing fun, music, dances and laughter. The celebrations continue after the award ceremony, in the bars of the town, which welcome their guests with music and dancing.

Pola Carnival will be celebrating its third birthday this year, and will start on Saturday the 18th 2017 with the meeting of a group of masked people in Karolina. The first costume show will be next to the Arena, from where the parade of costumes will start and head towards the square of Port’Aurea, where the main events take place at 11.30. The party continues in the gardens where they will serve lunch and then in the Port’Aurea square until 5pm (in the event of rain, it will be hosted inside the Pola Association) But the Carnival season can be felt already from the 17th of January when the masks take hold of the keys of the City of Pola, and ends when the Pust (the human looking straw puppet) is burnt on the 28th of February.

Here you can find all the information : Pola Carnival 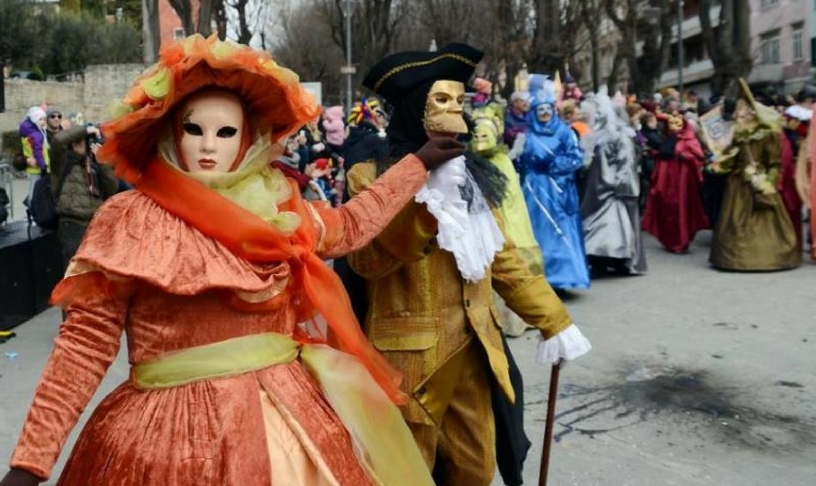 The Carnival of Fiume (Rijeka)

Fiume had become the most important Carnival city in Croatia. During Carnival, from the 17th of January until the 1st of March, the carnival folly will be contagious to anyone who visit the city. The peak of the celebrations will be reached with the closing party, the famous International carnival parade of Fiume, that will run along the streets of the city. From the beginning of the Carnival of Rijeka the number of participants has grown, as well as the number of visitors. It started with just 3 groups and now there are more than 100, with thousands of participants. Fiume’s Carnival is in the list of the 500 most important events in Europe – Top 500 European Events, while the Sunday Times proclaimed it as one of the most exotic events of the world in their book “501 must be there events”.

Here you can find all the information :  Carnival of Fiume 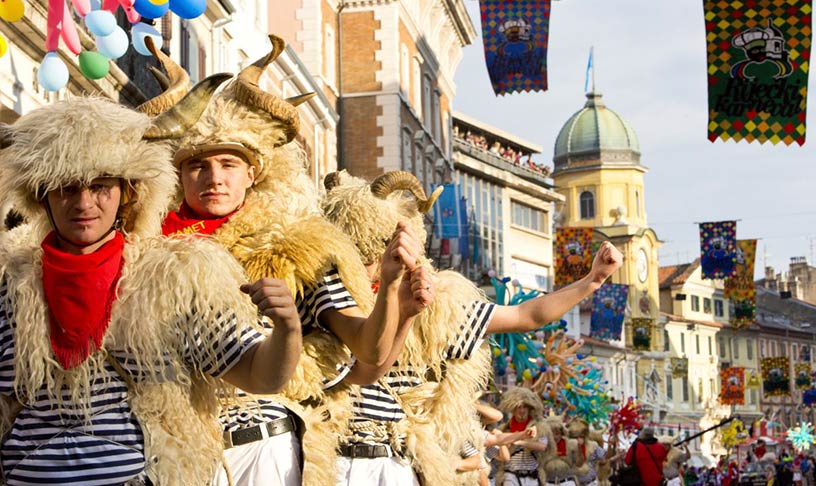 Last, but not least, the famous Venetian carnival. Just 2 hours from Trieste, the most beautiful, grand and colourful event in the northeast. From the 11th until the 28th of February, Venice will be a large stage, ready to host new events, shows and lots of changes. There will be many grand banquets, held at Ca’ Vendramin Calergi, in the halls in which Richard Wagner composed the «Parsifal», the party on the water of the 11th and 12th of February and the three flight from Saint Marc’s belltower, the one of the Angel (the 19th), of the Eagle (26th) and of the Lion. Everyone particularly awaits for the Eagle of Carnival that will be lowered from the belltower of Saint Marc to the rhythm of music and historical dancing, right in the centre of the festive square. The grand finale is for Tuesday, when Venice Carnival 2017 will celebrate the glories of Saint Marc in the Flight of the Lion: the winged lion, the majestic flag of Saint Marc that made the Republic of the Serenissima immortal in the Mediterranean and the World. 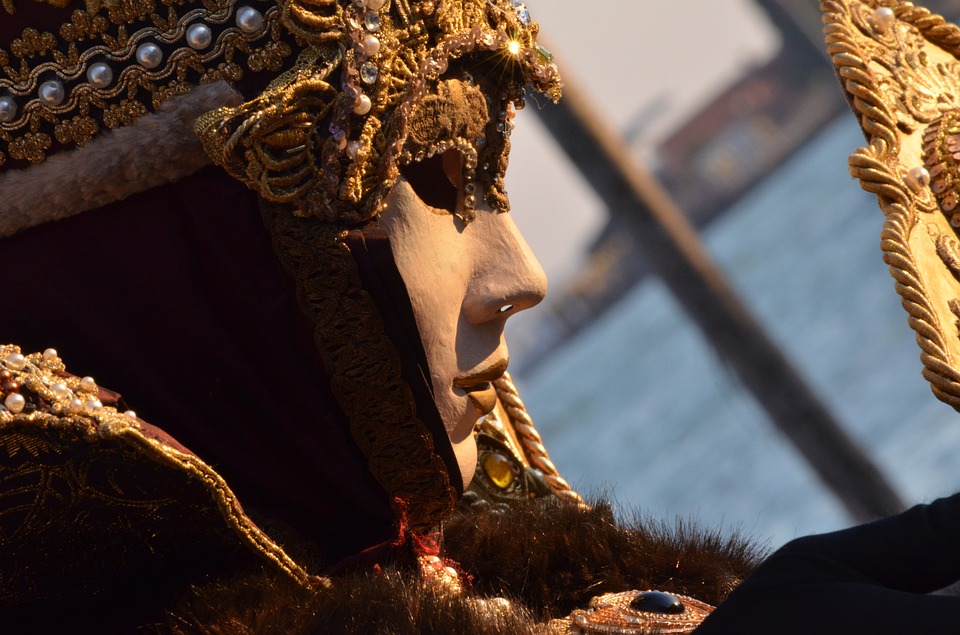 A minibreak coming up? Miss Claire has the right idea!