Zadar: what to do here?

From the Christmas markets to the discovery of the city without tourists.

Those of you that have been following me know that in April I’ve been to Zadar…here’s that story. Well, I wanted go back there in December, a month in which it’s easier to fully enjoy this beautiful city and its treats thanks to the lack of tourists.

This time I stayed in an excellent 4-stars Relais & Châteaux, the Bastion hotel, located in the heart of the old city of Zadar; for three days I didn’t move from here. Instead, I was fascinated by the splendid sunsets, beloved by Alfred Hitchcock (who used to describe them as the most beautiful in the world) 🙂 Yes, you have to know that the famous 1960s’ film director used to spend his holidays here at the now abandoned Hotel Zadar.

Let’s head back to the hotel, shall we? I want to start by saying that the Bastion hotel was built inside the medieval walls of the 13th century Castle (Kaštel), so much so that in their SPA that only has place for 8 people, you can admire the original stones of the fortress while having a sauna, a bath in the Jacuzzi or in the hammam.

The breakfast lounge is sophisticated and elegant as are the halls and the bedrooms, from standard rooms to luxury suites. They’re all really comfortable and super cozy!

Are you looking for something to do in Zadar in December? Let’s find out together! I don’t want to repeat myself, but I highly recommend you to visit it during this month to be in complete peace. Trust me!

The sea organ is no doubt one of the many destinations I’d start with: go there at sunset, when the sun dives behind Ugljan island and the sky and the sea become orange, red and pink. The organ invented by the Croatian architect, Nikola Bašić makes sounds that resemble to the call of orcas…it’s magical, believe me! 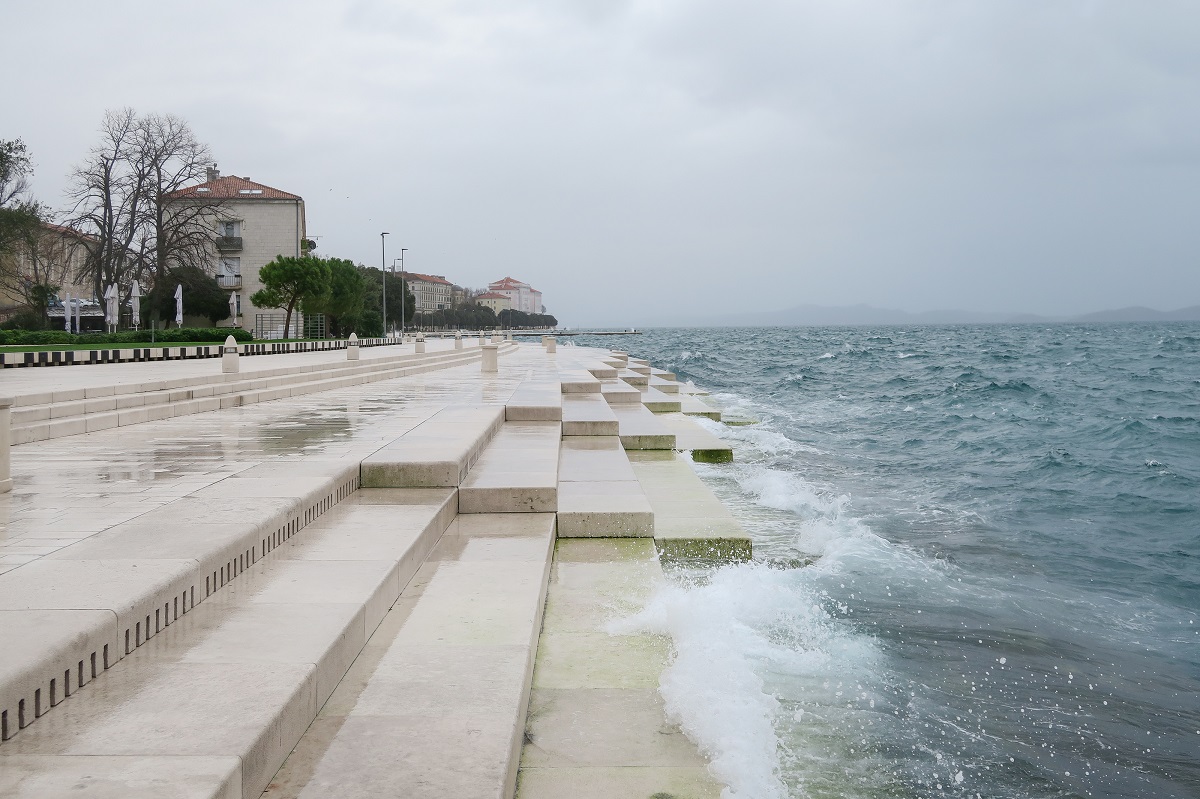 Nearby, you can enjoy another beautiful sight, the Greeting to the Sun, which was designed by Bašić as well and is dedicated to our star. It’s made of three hundred multi-layered plates of glass that are at the same level as the seashore. They’re put in a 22-meter diameter circle, and each one of them has a photovoltaic panel underneath. It’s meant to symbolize the communication with Nature throughout light. 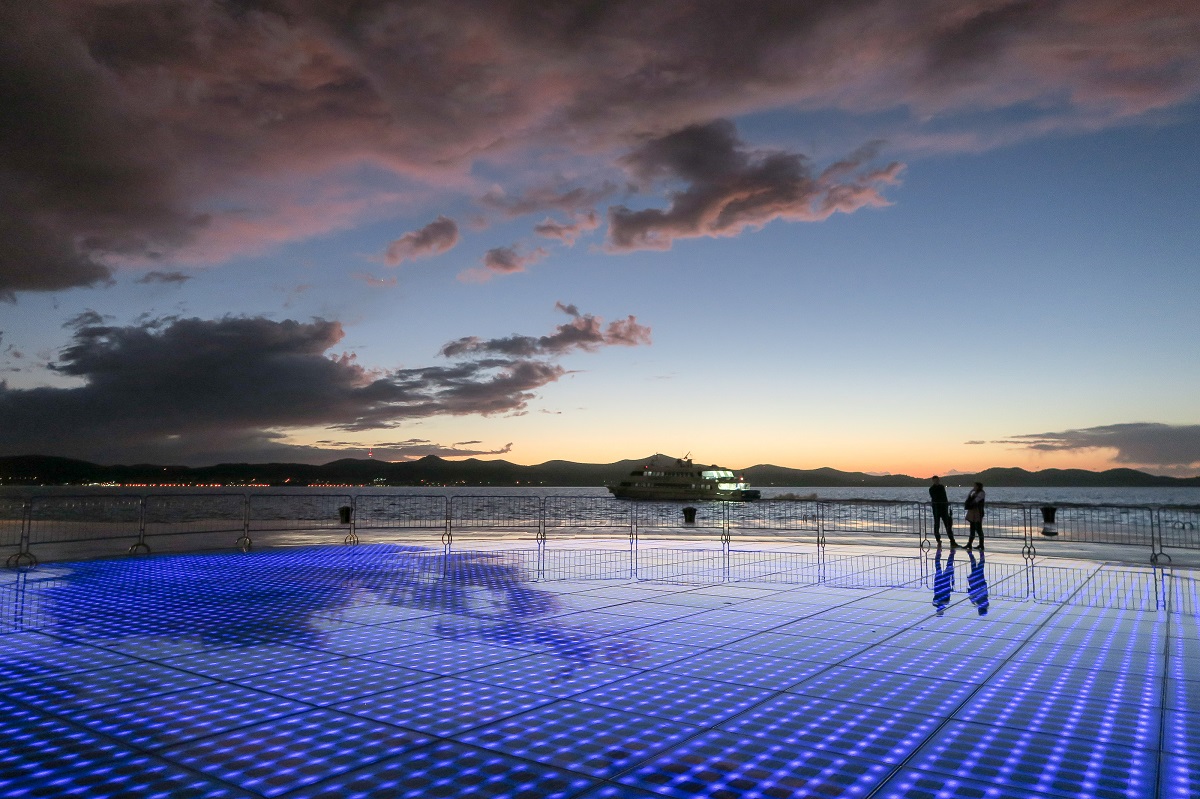 My advice is to head to the old University (Mihovila Pavlinovića) from the seashore: it deserves a picture. It’s a marvelous place not far from the sea. You will be amazed. As we’re talking about it: Zadar’s University is the youngest of the country according to registration dates, but form the historical point of view, it’s the oldest in Croatia and in Europe. Let me explain: in 1936 the general Dominican institution for superior education called UNIVERSITAS IADERTINA was already active in Zadar. On that note, in 1956, they created the art faculty in Zadar. The first sitting of the Academic Senate was held on March 25th, 2003, which is the official date of foundation of the University (Dadi Academicus).

From there, facing the sea, you will see a beautiful statue. It represents a man sitting on a bollard, holding a shell in his hands: it’s a monument dedicated to the scientist and biologist Špiro Brusina. I think that with a stormy sea it’d be even more beautiful. 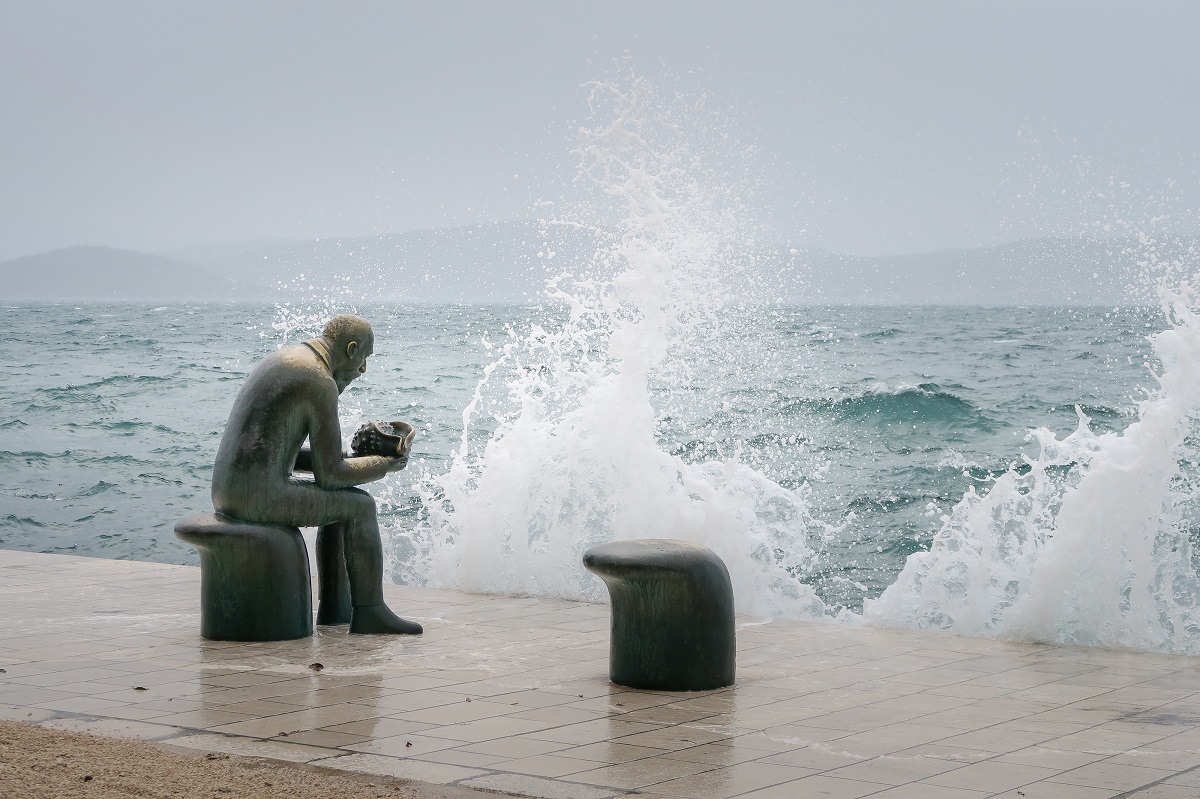 Don’t miss the Museum of Ancient Glass inside Comacendi Palace, which was built in 1877 in an old Maraschino factory; here are held 2000 glass objects that date back from the 1st to the 5th century b.C. that were found in Zadar and in the surrounding areas.

On the last floor you will find a laboratory, where you can closely observe how the glass is blown and worked by hand; Marko, a 30-year-old man, has been working at the museum as Master Glass-worker for ten years now. He shows the visitors how to create wonderful artifacts (that will be sold as souvenirs at the gift shop on the first floor), but he only does it 6 months per year, during the high season. During the rest of the year, Marko follows some courses and participates in conferences and conventions regarding his field. After all, he’s the only Master Glass-worker that works as a glass artisan 12 months a year in the whole country!

You can’t miss Zadar’s Fine Arts Gallery! Here you’ll find art pieces from the 17th, 18th and 19th century waiting for you, along with the famous “Ugaljan Triptych” from the 13th century. The Galley of Fine Arts has been funded on October 10th, 1948 after World War 2 destroyed the city; until 1963 it was an independent institution that did its own research and kept and presented to the public artistic material that dates back to the 20th century.

The old Doge’s palace, where the gallery now is, hosts several showings, from the one about the local mountains to the exposition of the contemporary Istrian artist Davor Savincenti that I liked very much and that you can visit until February! 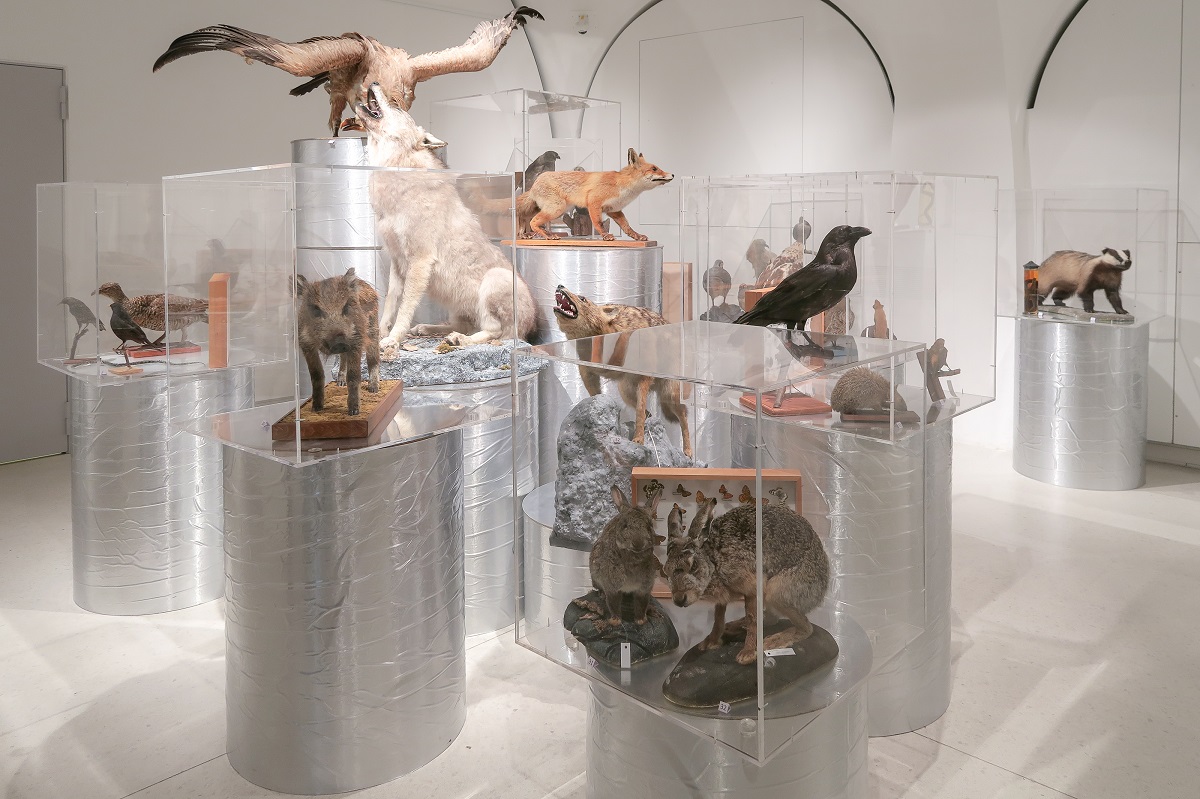 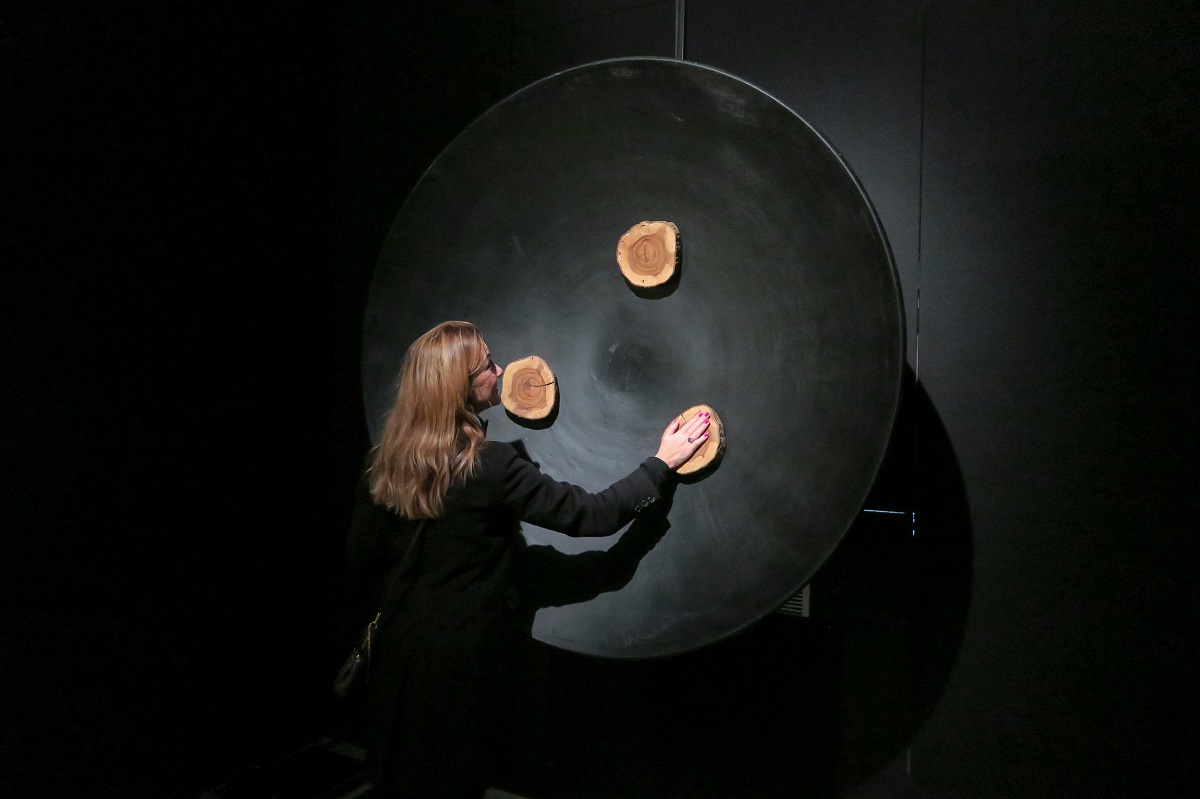 On the upper floor, you can admire the living room furniture that was donated to the museum and some pictures from Franjo Salghetti Drioli, that in 1870 represented the Harmony of the ex Yugoslavian countries just like this. And what to say about Vlaho Bukovac’s representation of Franz Joseph I from the 19th century? 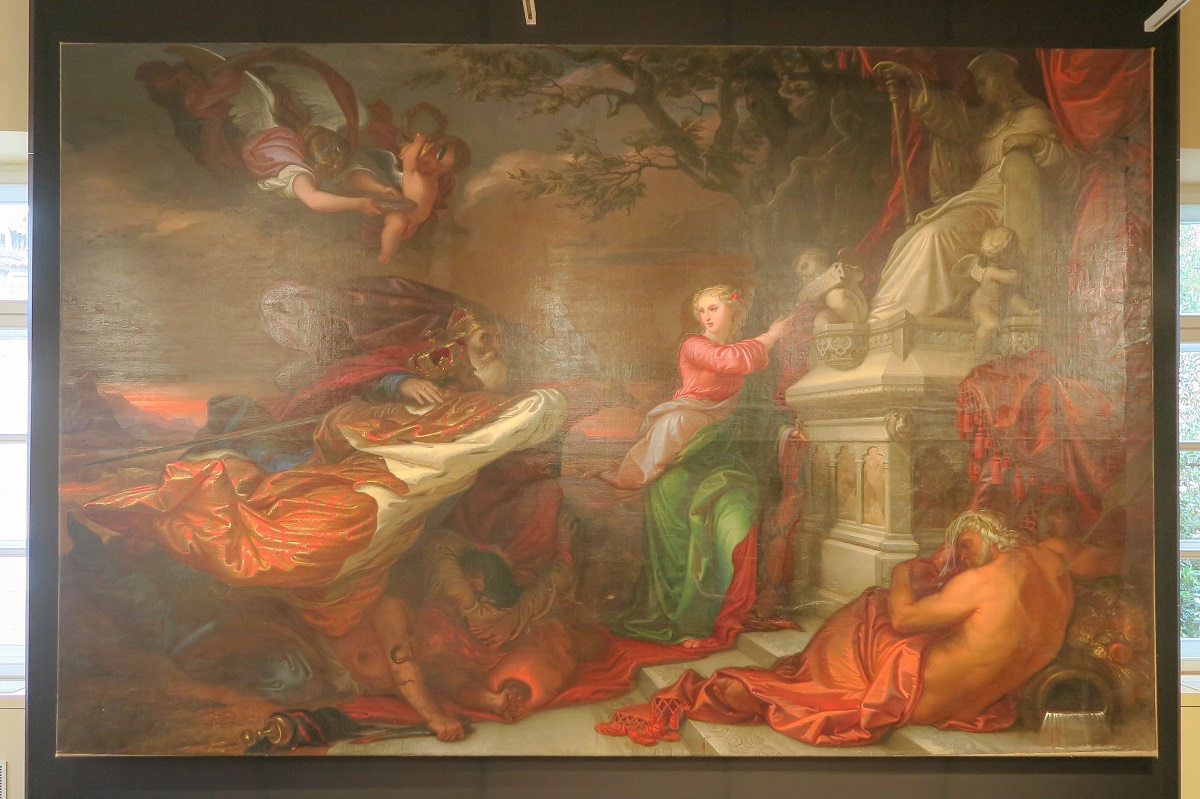 When out of there, my advice is to go to the heart of Croatian design (we’re then still talking about art) at Abito’s, the only shop in the old city center to sell tailor dresses made by several Croatian designers (you will find it at 3, Don Ive Prodana).

Now, you absolutely have to see Zadar’s Market! A wonderful place where you can buy fruit, vegetables, honey, Pago cheese…and don’t forget their fresh fish! If you’re going back home, my advice is to fill up you car with every delicacy you can 🙂 their dried fruit is very good, they offer for example dried figs and dates, and juicy quality pomegranates are sold at a really low price. 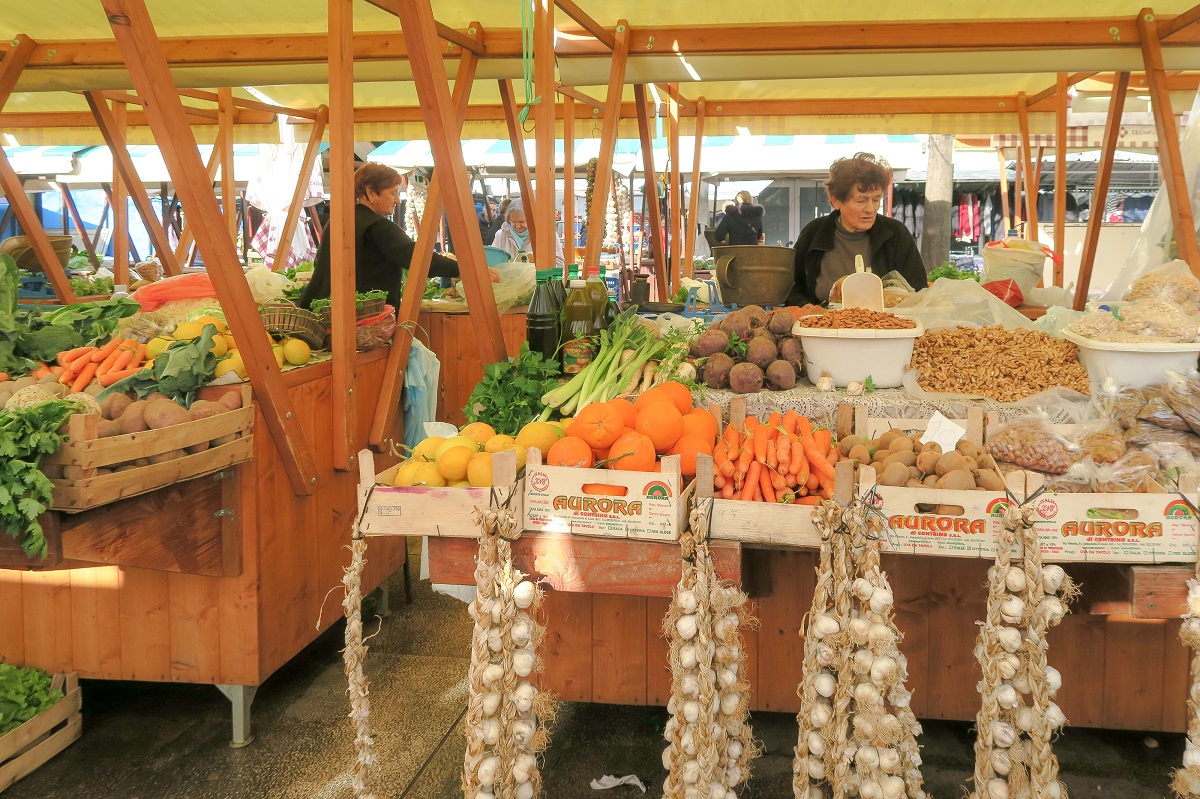 …would you say no to Christmas markets in December? You can’t!

The historic city center is filled with lights and decorations and in the old main square you’ll find the Advent stands. Now at their fifth edition, during the 45 days of opening (from December 22nd to January 4th), Zadar’s Christmas markets have hosted the more concerts in the country and events created for children and adults have been held night after night. 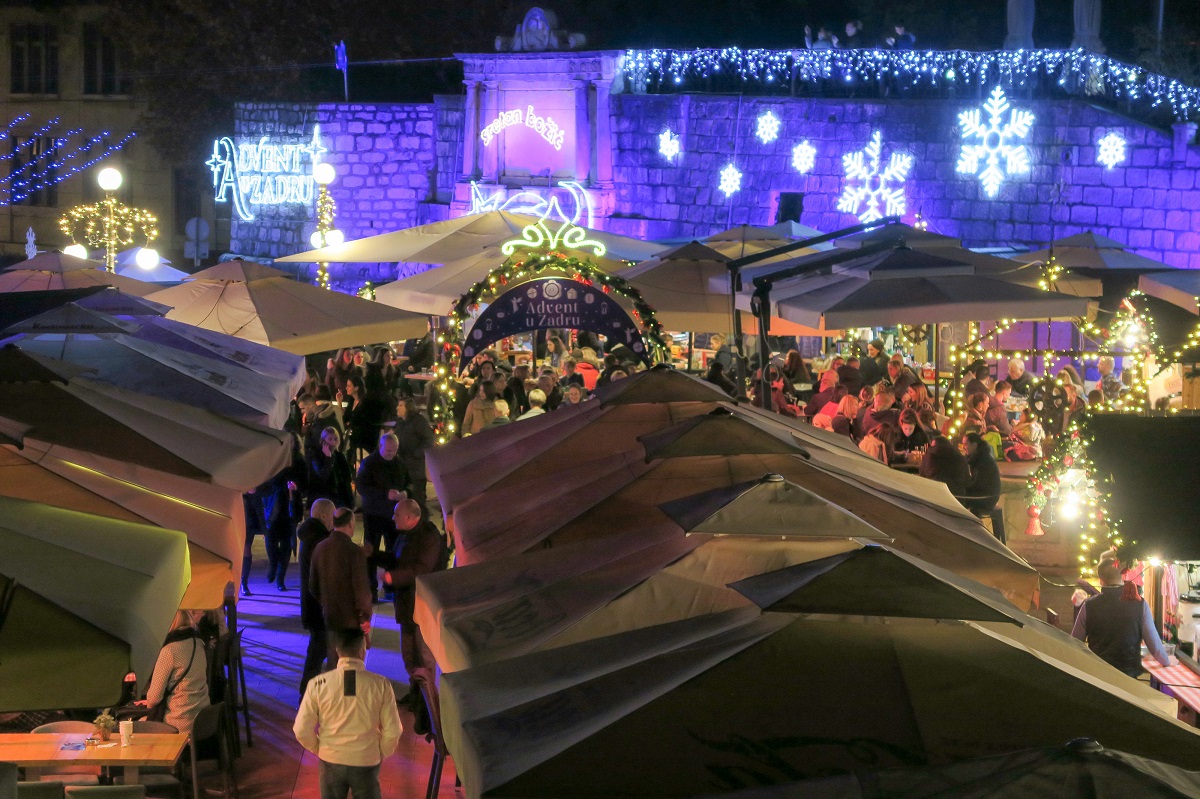 Zadar’s citizens, with whom I’ve talked for a bit, explained to me that this project has brought the locals to get together in the in city center like in the old times… something that didn’t happen anymore after the advent of shopping centers, those monsters that almost killed the local commerce. I was moved by this sight…it was just spectacular!

At the Christmas markets you won’t find the usual small cabins with artisanal products, but gastronomic delicacies and a wide willingness to chat with the (little) tourists that visit Zadar in December.

…yes, I know. I know you’re waiting for a guide to find out more about the best food around here. I’m sorry, but you’ll have to wait some days more for that! But I’ll be back soon 🙂 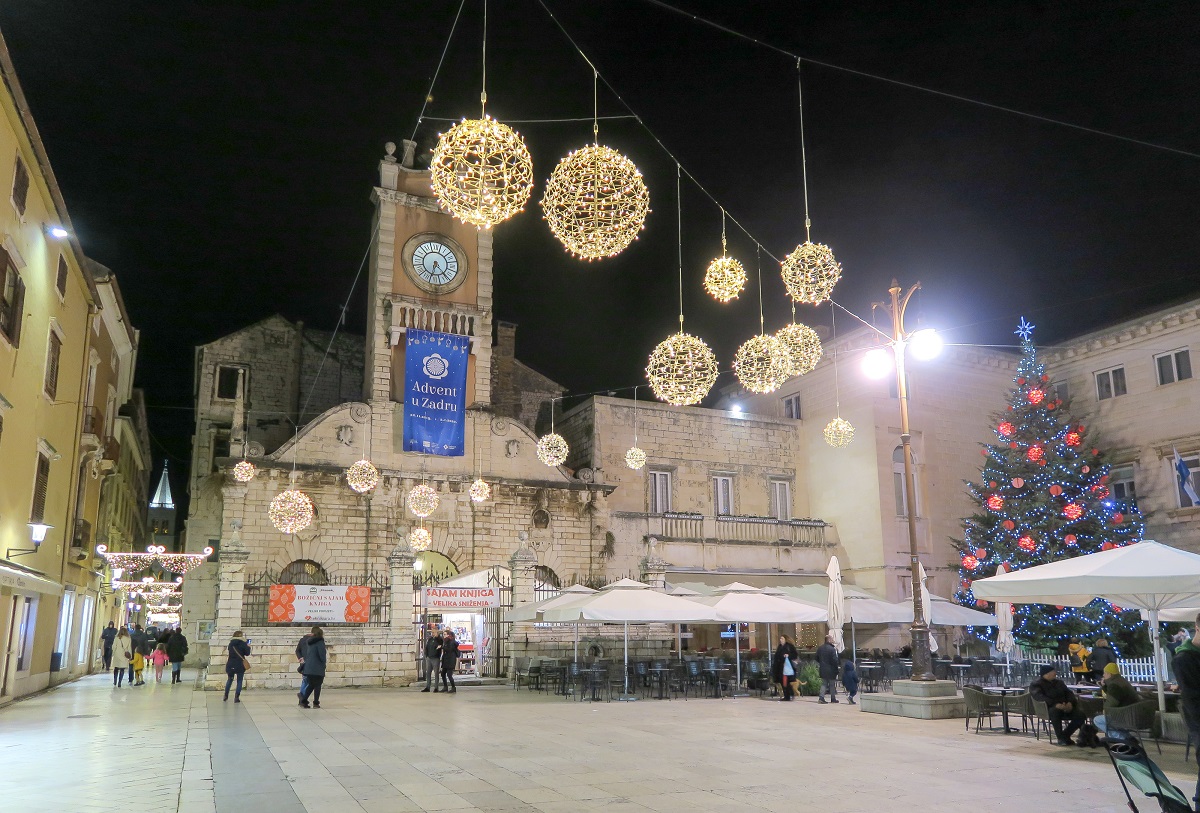 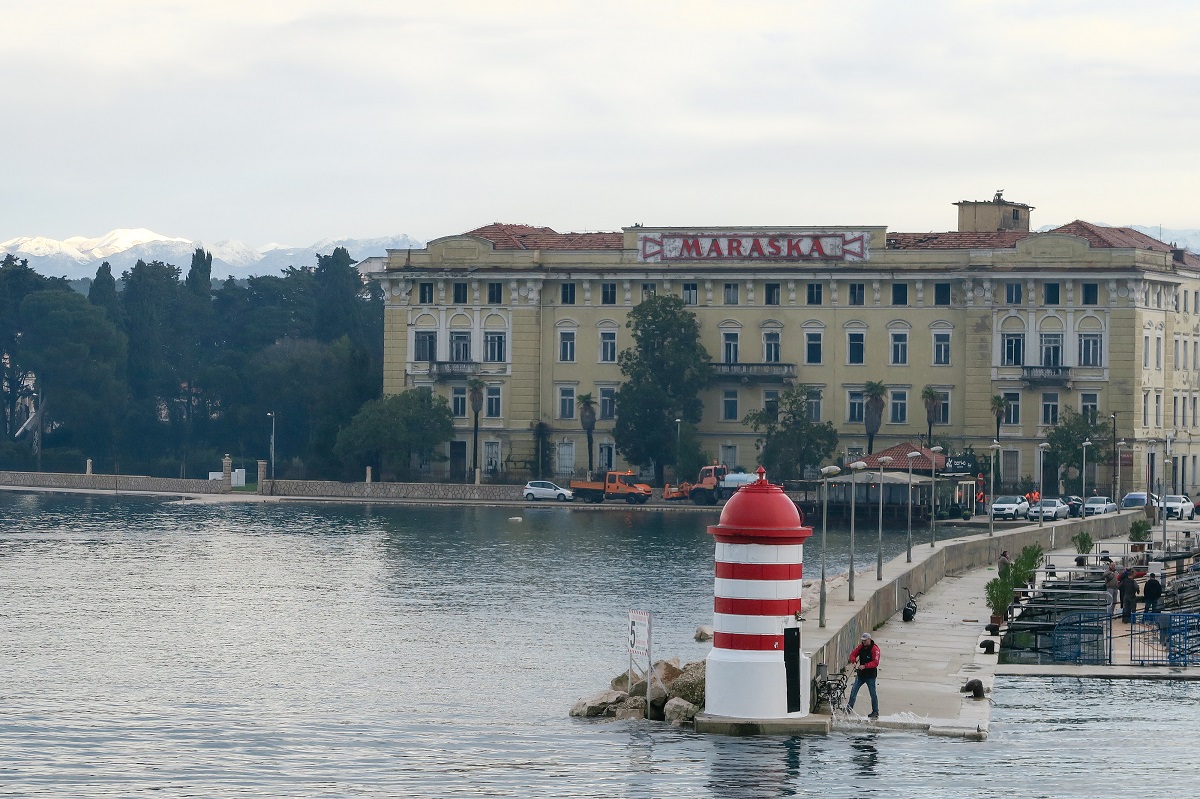