Discovered in 39 B.C., they were developed in 1840 by Gustav Adolf Ulrich of Trieste

We’re in Rimske Toplice, a Slovenian town in the common of Laško, which is well known for the brewery with its same name, for the Restaurant Pavus I’ve told you about, but also for something else! In Rimske Toplice we find the most antique roman thermal baths of the country J a jewel with a very fascinating story.

We’re in the beautiful valley of Savinja, surrounded by uncontaminated woods; the perfect place to regenerate your mind and body thanks to the thermal springs they have here.

The first text to talk about Rimske Terme – which means Roman Thermal baths – is a document of Aquileia from 1486; but it was Gustav Adolf Ulrich from Trieste to develop the structure around it. In 1840 he bought the springs and gave the property to his wife Amalia from Austria.

Gustav was a trader and doctors had diagnosed him with an incurable illness; he decided to be treated with the thermal water of Rimske and, incredible, he was cured after a few months. He decided to purchase the springs for this reason (and this is why it is named after Amalia, like many treatments); the springs quickly became an attraction for the aristocracy and high ranking officers.

Among the guests of this lovely place there was the Princess of the United Kingdom, princess Victoria of Prussia, Princess Murat, the Austrian writer Franz Grillparzer, the Serbian writer Vuk Karadžic, the emperor Ferdinand of Austria, the archduke John and many more.

Here they still conserve the original tub used by princess Murat (Napoleon’s sister): protected by the Cultural property, it’s made in marble by Murano artists. 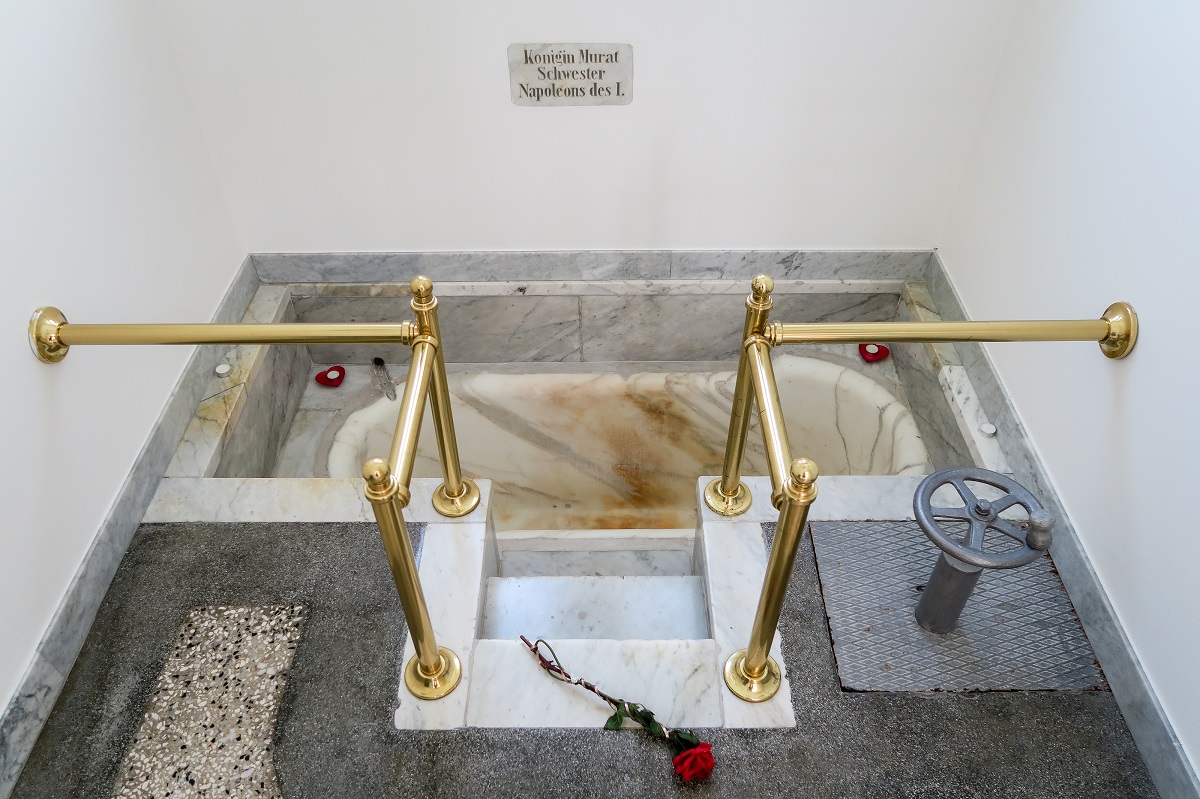 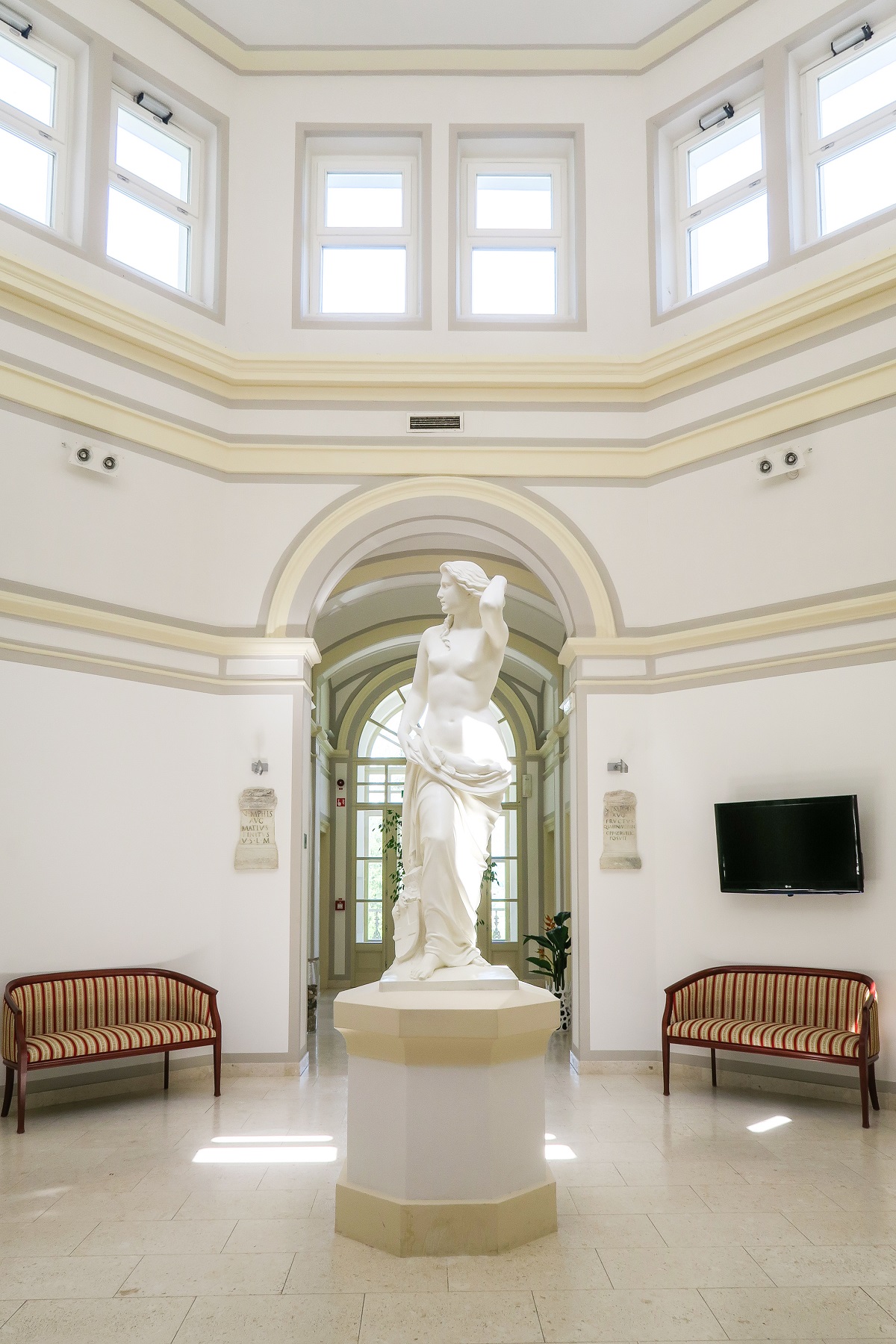 The thing that most impressed me about this place was that you can sit in these stone baths and let yourself be cuddled by a unique treatment (I’ve never tried anything similar elsewhere!). You lie for 20 minutes in thermal water, without the addition of chlorine, and you let the 15 hertz frequency regenerate your body. I’ll explain 🙂 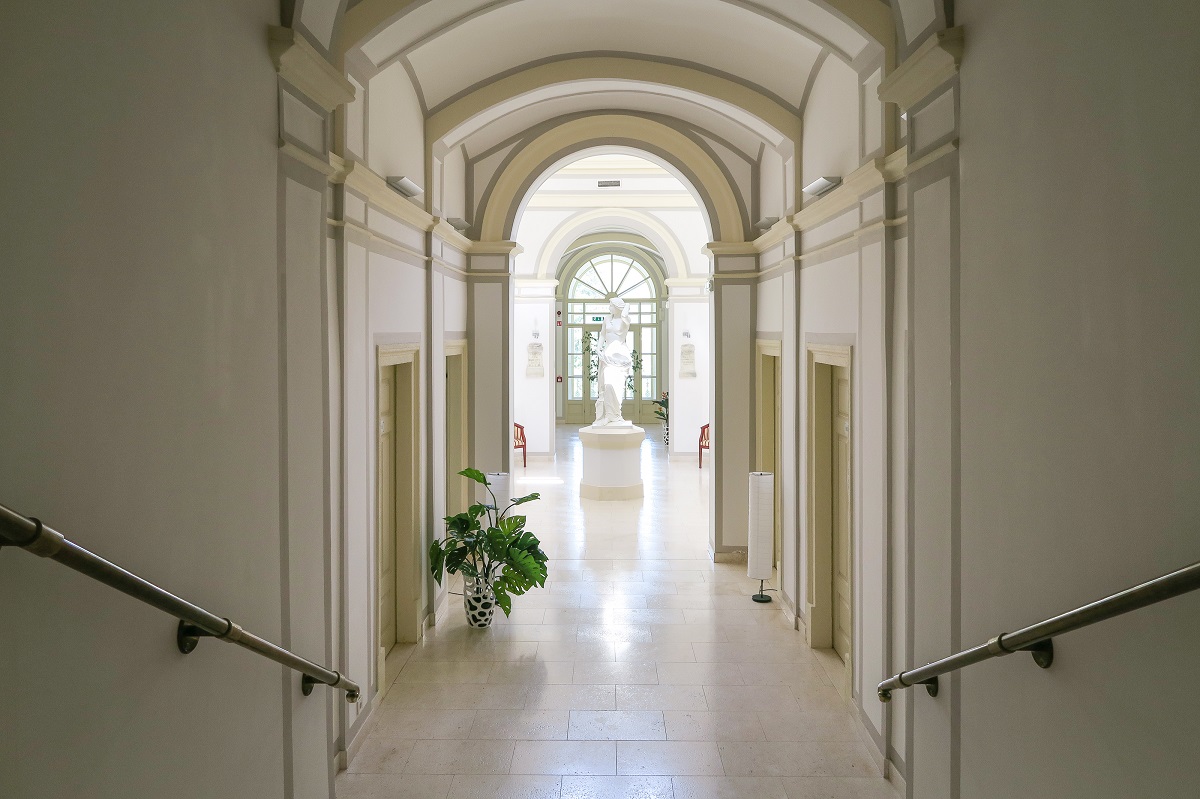 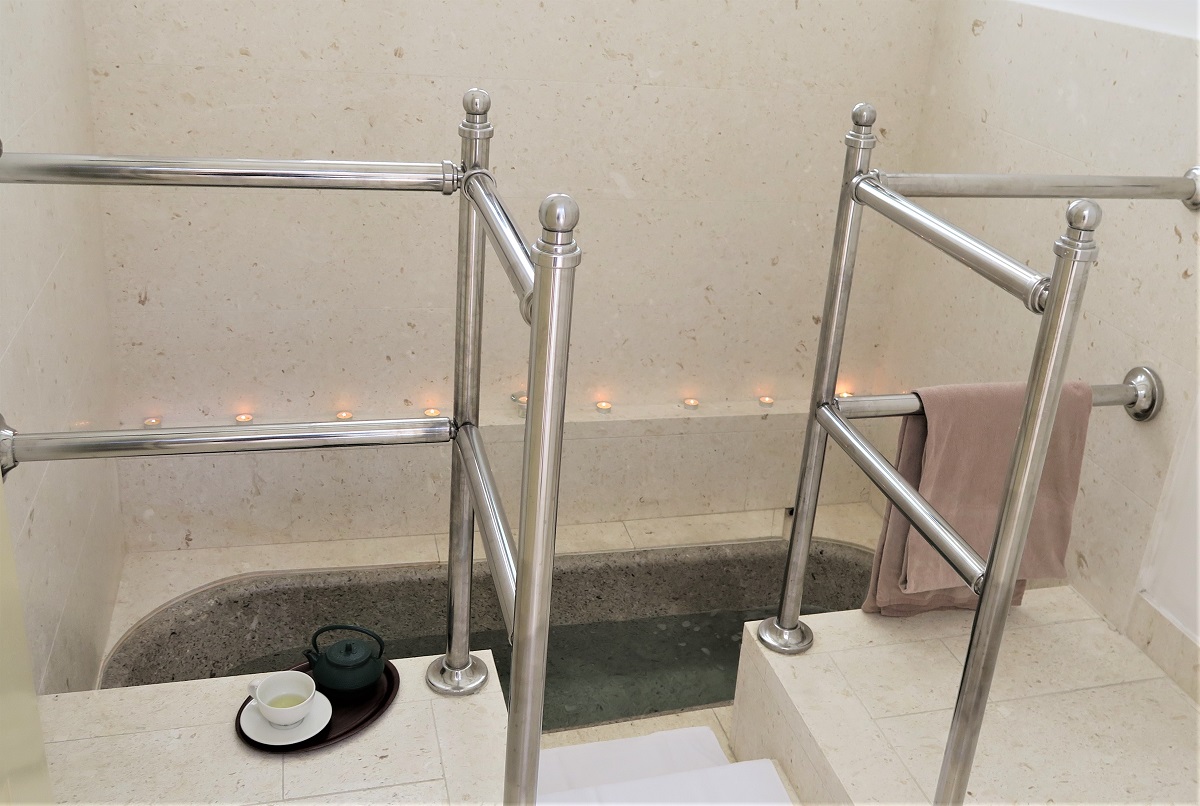 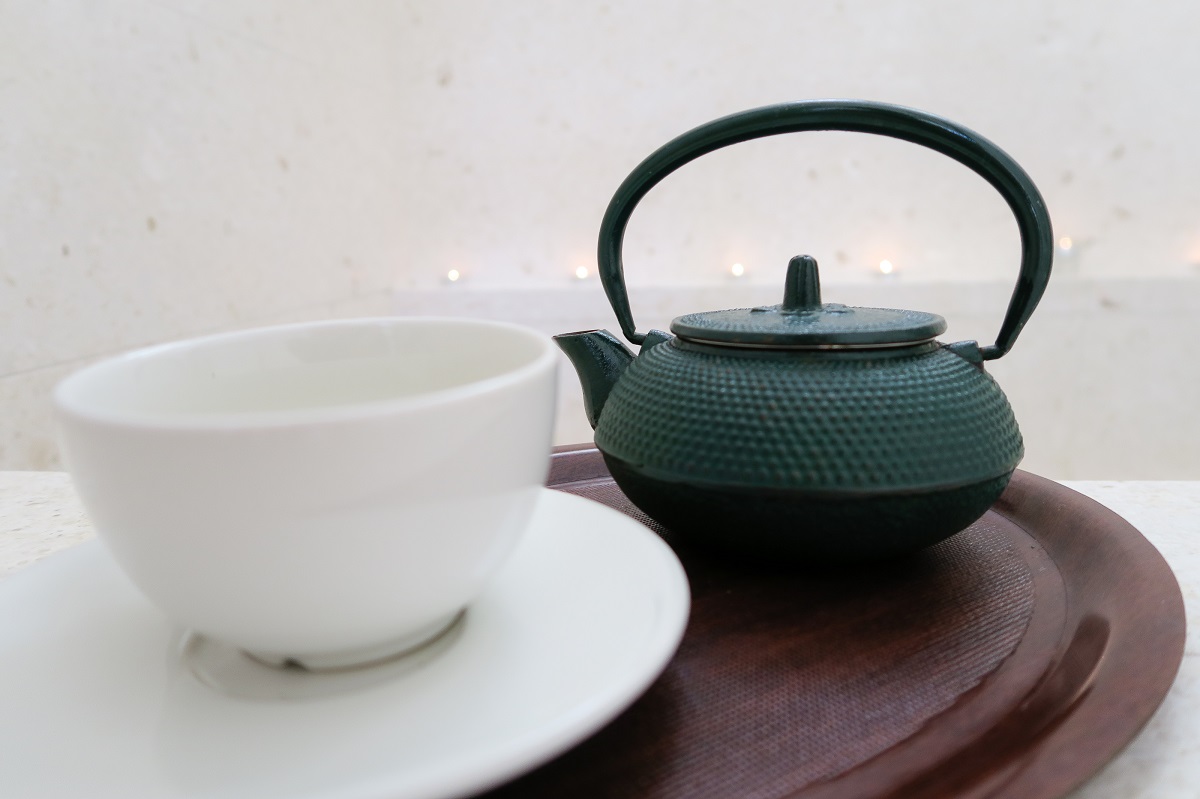 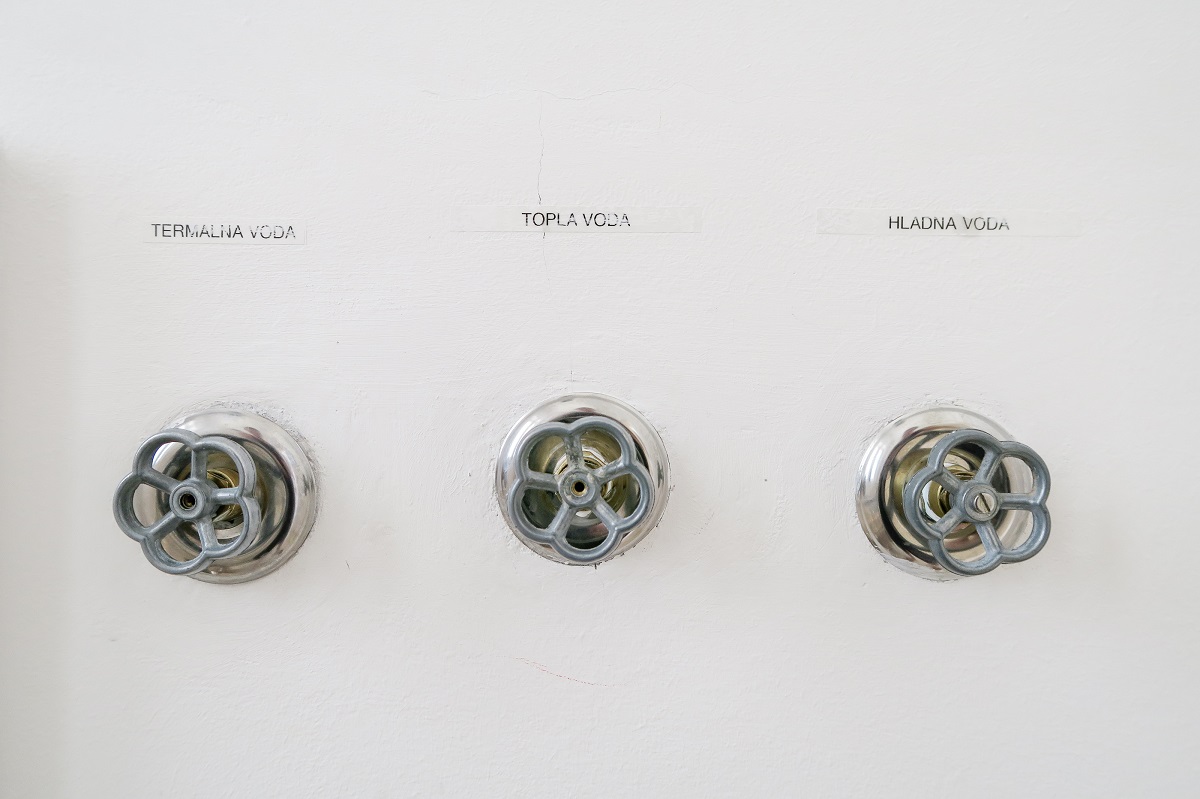 They conducted a study (led by a Professor from Trieste!) that pointed out that thermal spring water doesn’t lose its benefits with the frequency of the hertz produced by the imperceptible noise of the running spring. After the treatment, a proper regeneration, they also serve a detox tea.

In the indoor thermal swimming pool, which has an architecture that will bring you back to Roman times, the temperature is about 32° C, as in the outdoor pool; the Jacuzzi pools – four indoors and three outdoors – have a 35° C temperature. 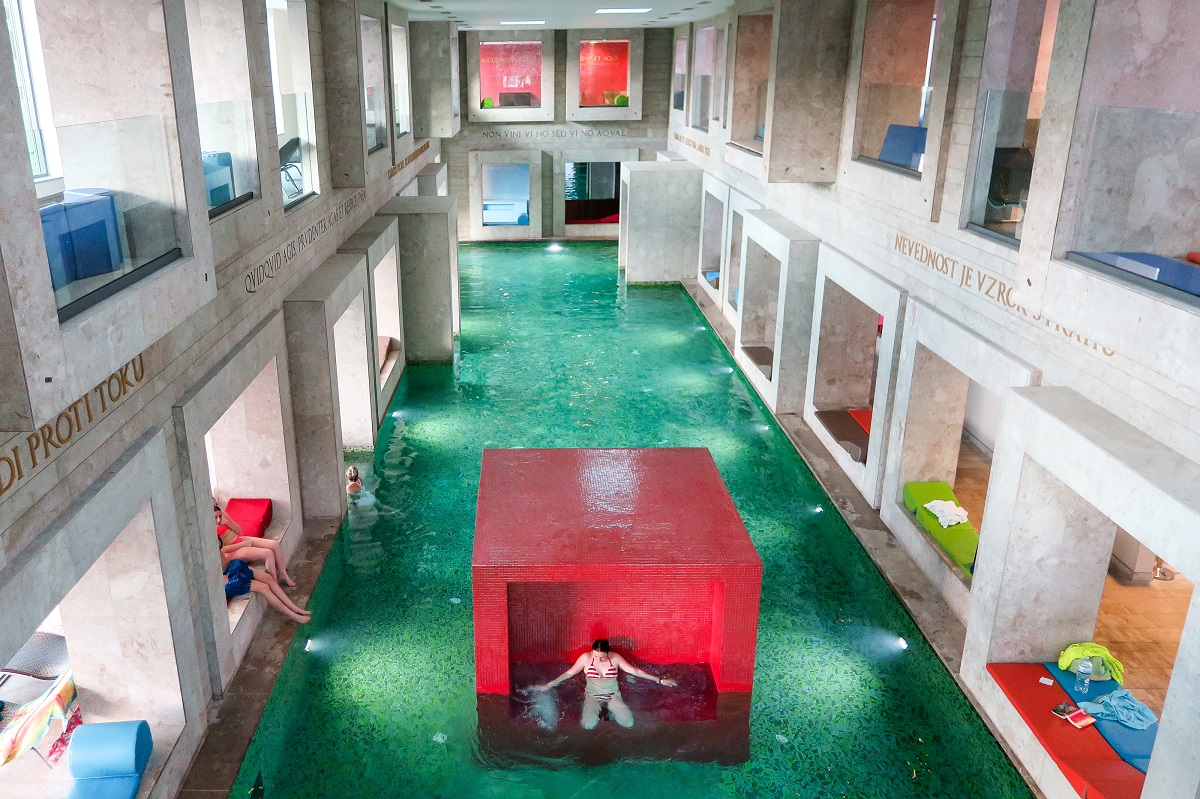 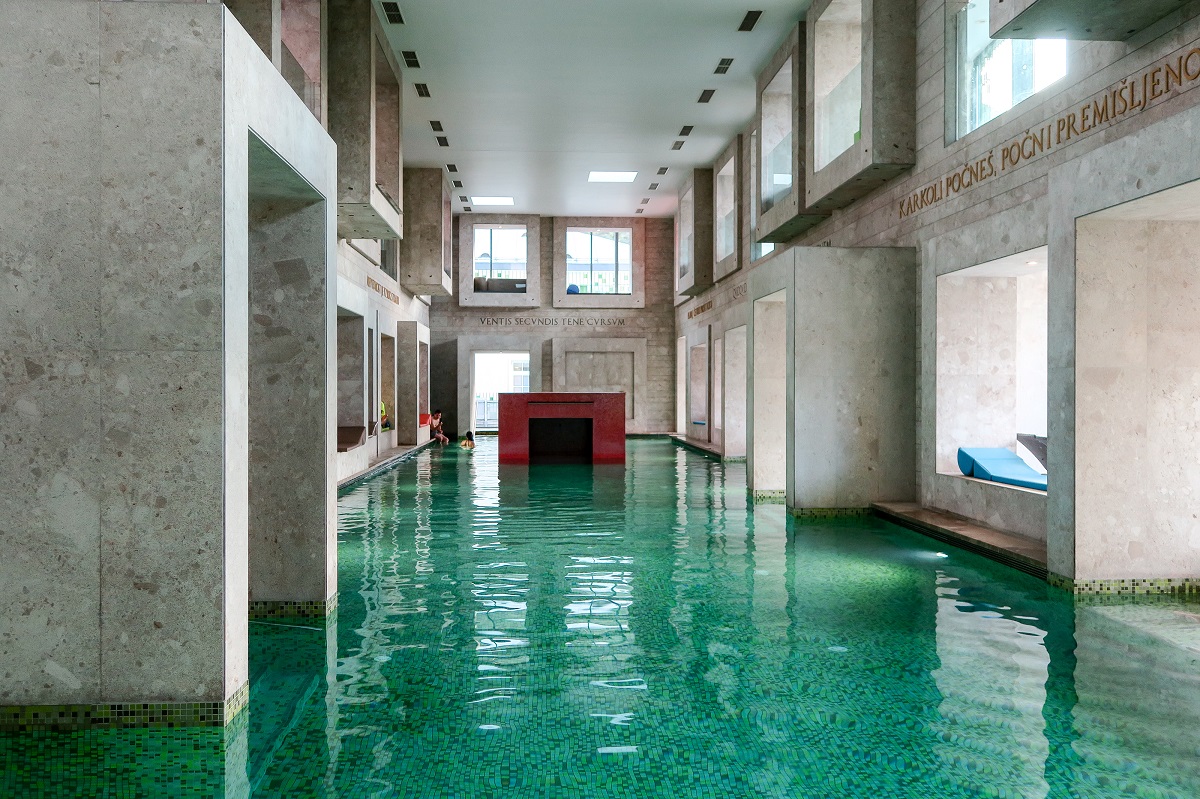 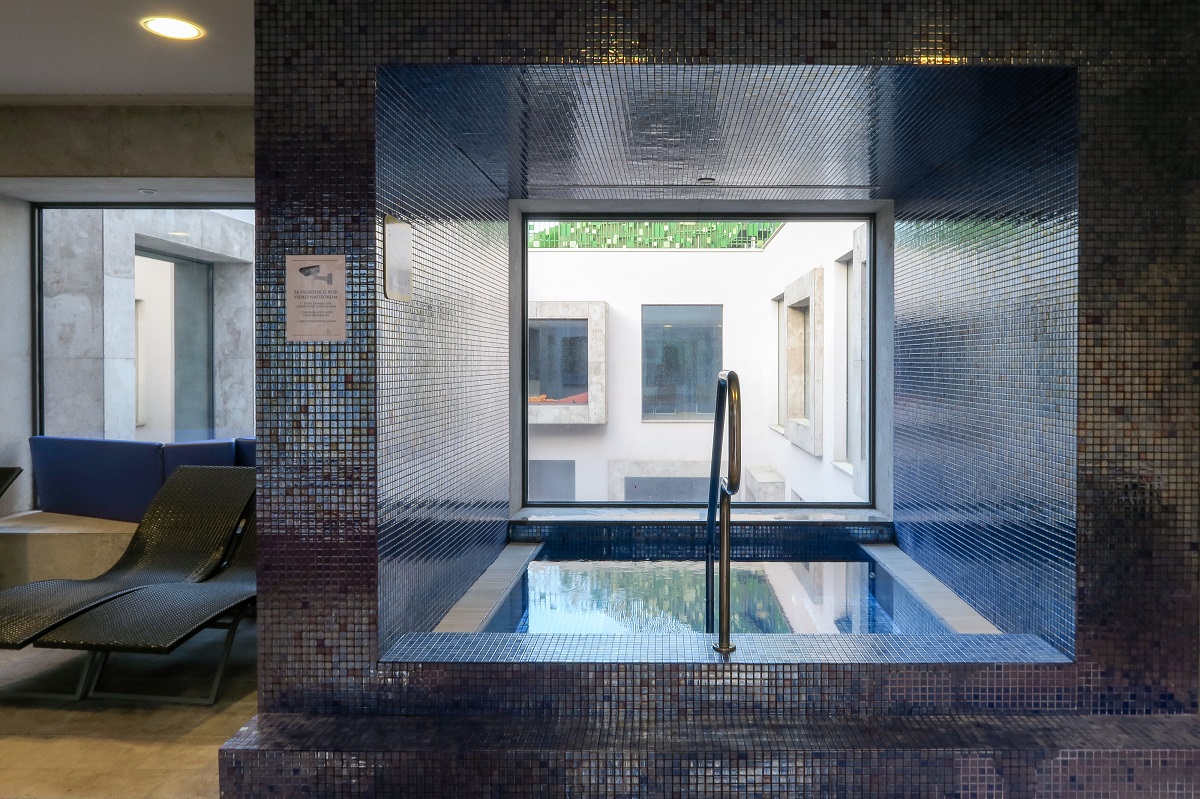 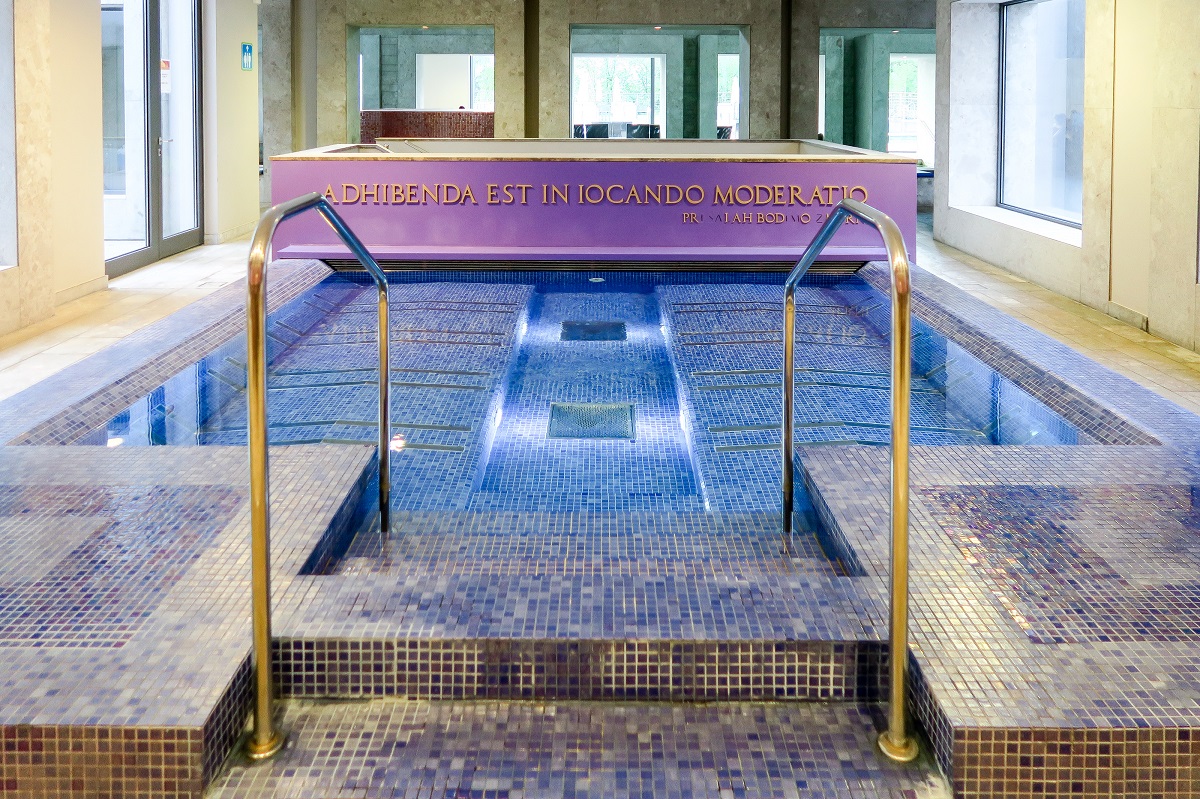 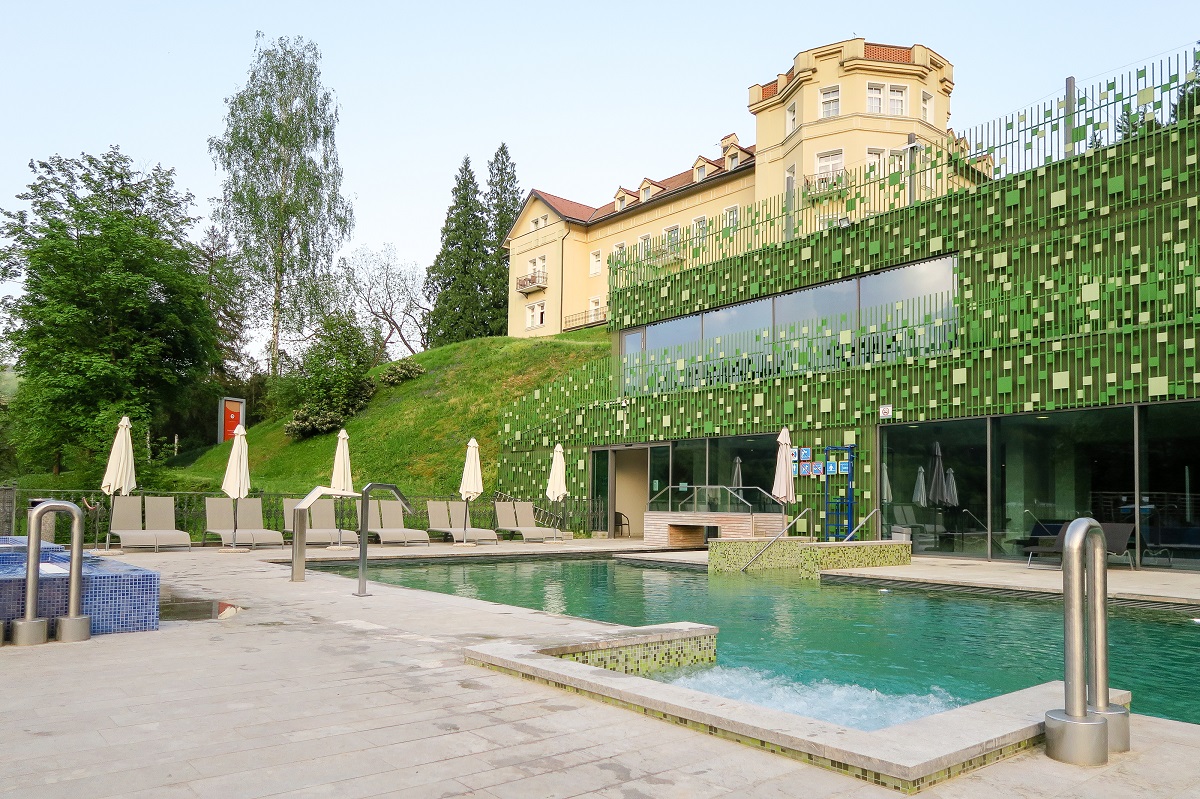 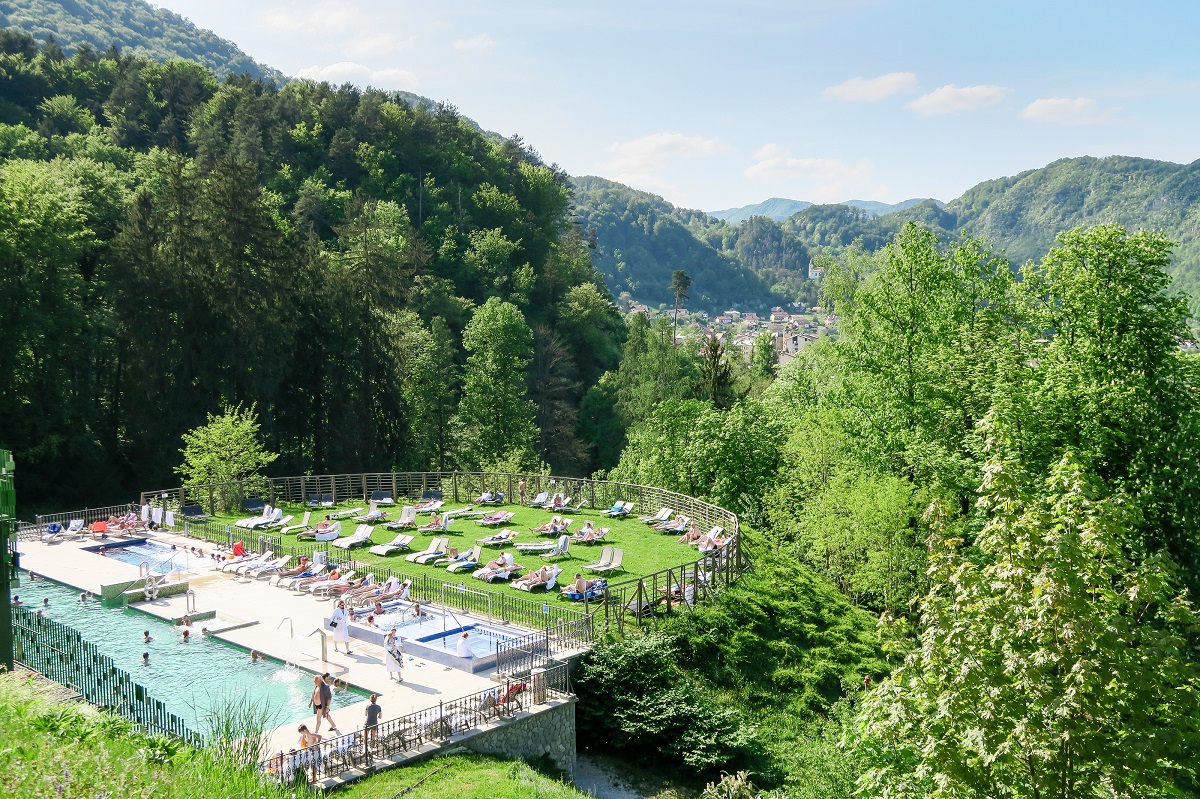 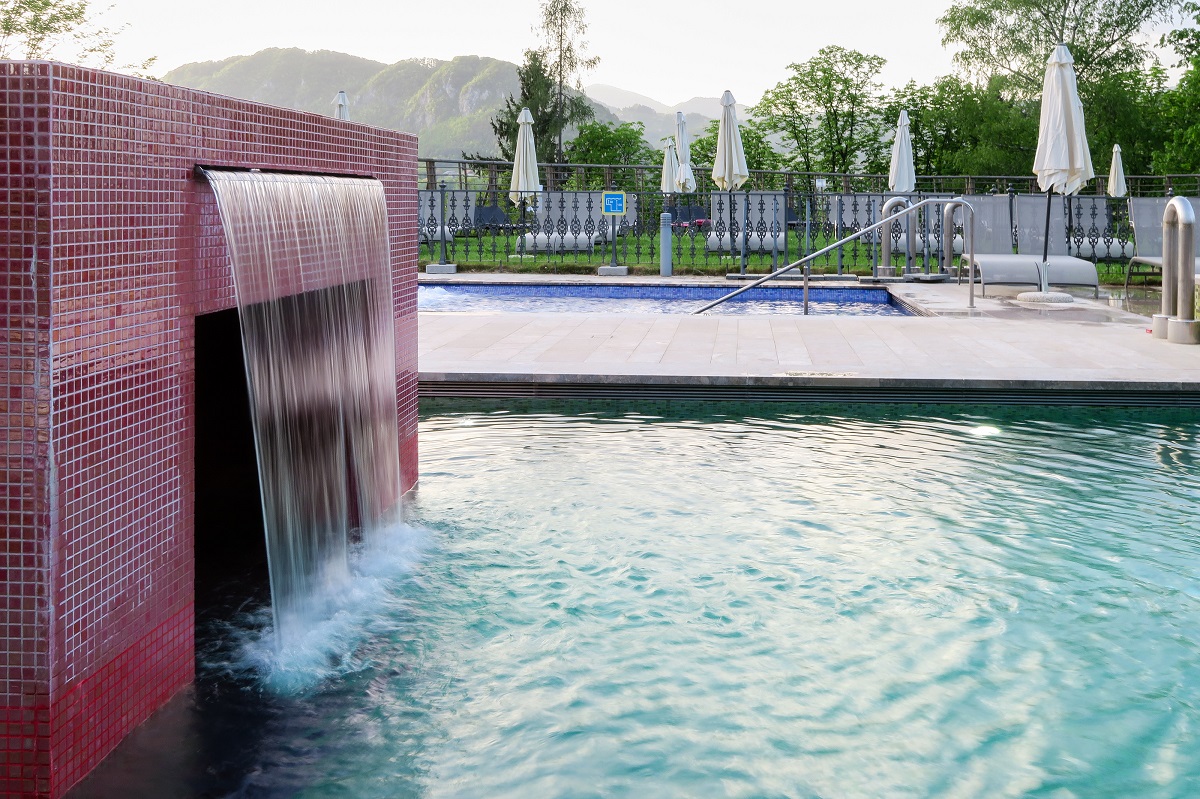 The area dedicated to the thermals pools is very big, with about 450 square meters its guest are always very comfortable; you never have the feeling of being on top of each other. They have a large selection of treatments here, from the medical center to the thermal one, as well as the wellness area, so everyone can find just the right service. They also usually have some interesting offer displayed on the door of the lift or your room when you check-in. 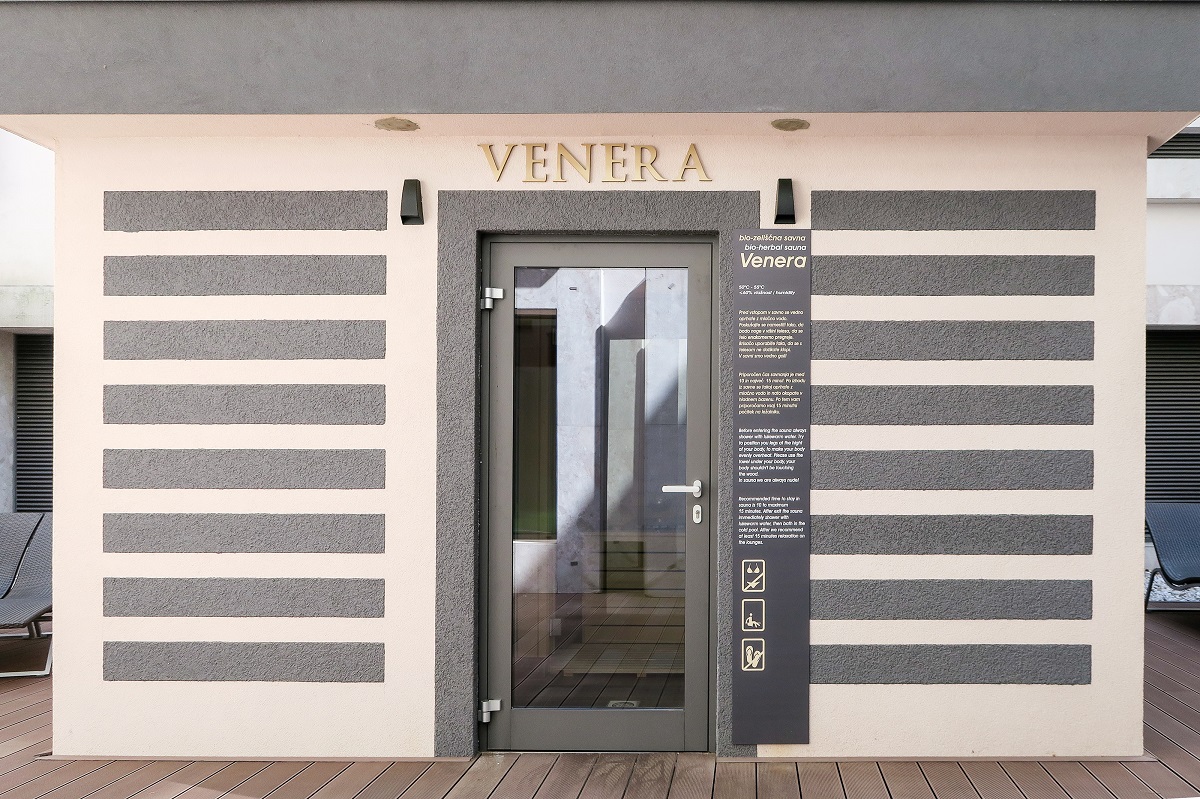 There are three different  hotels in this structure; that way you will be able to choose what you prefer, the antique villa or the ultra-modern structure built into the rock, to not disturb the natural beauty of the place… the hotel is even covered by a layer of green metal! 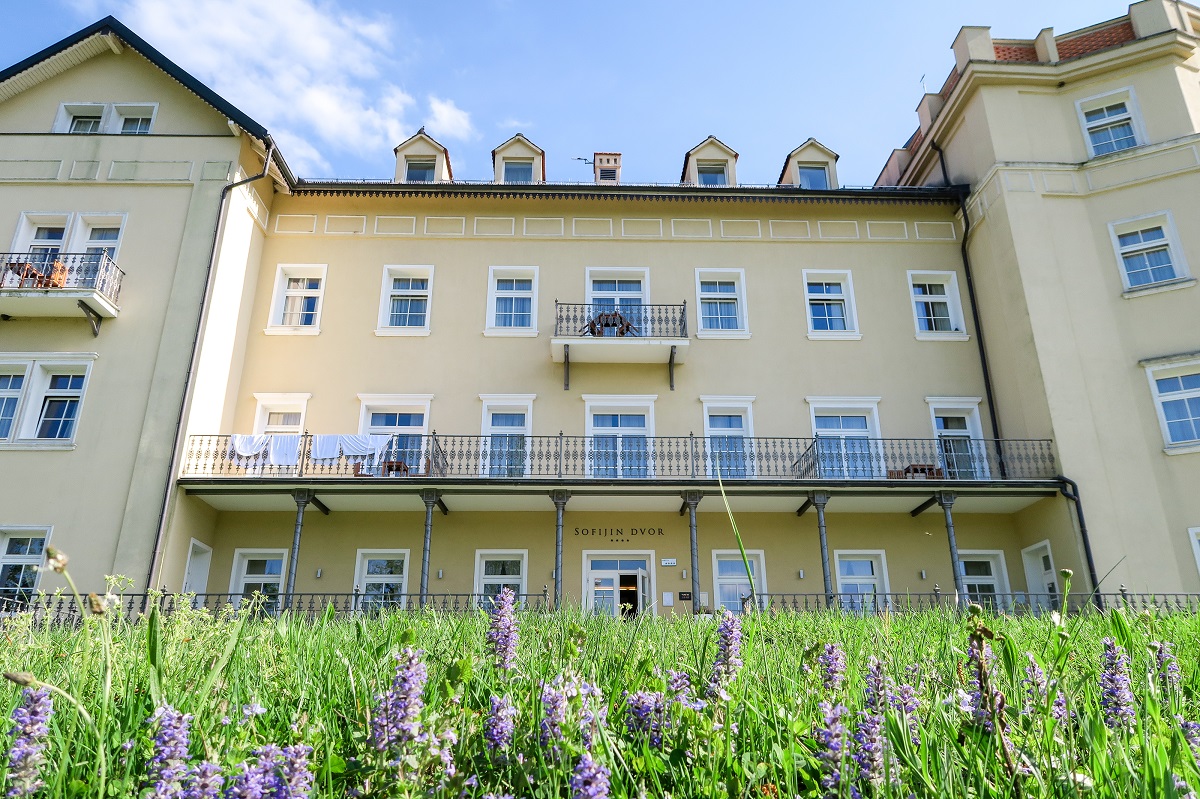 Green like the vegetation that grows beautifully in the surrounding area, among large oak trees and lovely flowers.

A stay at Rimske is magical; you’ll feel like your suspended in a different dimention, far away from everyday routines. A step back in time. The perfect place to relax completely is right here! 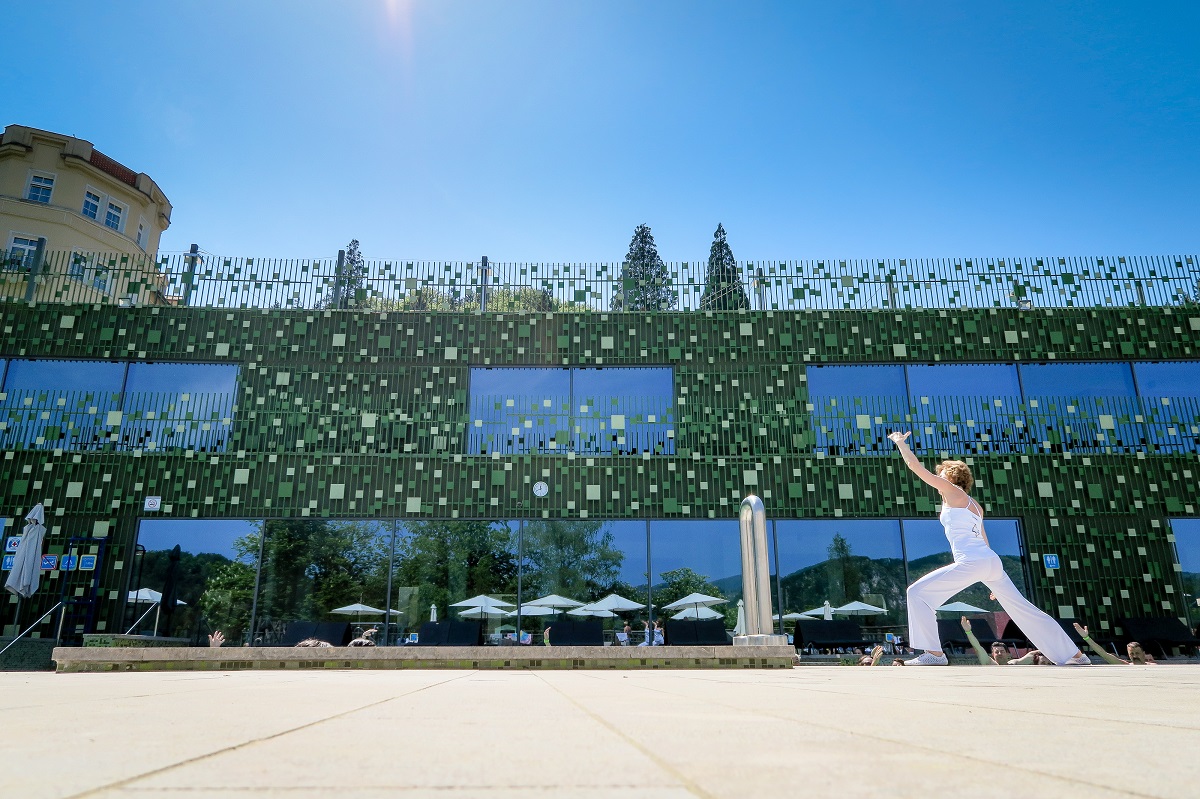 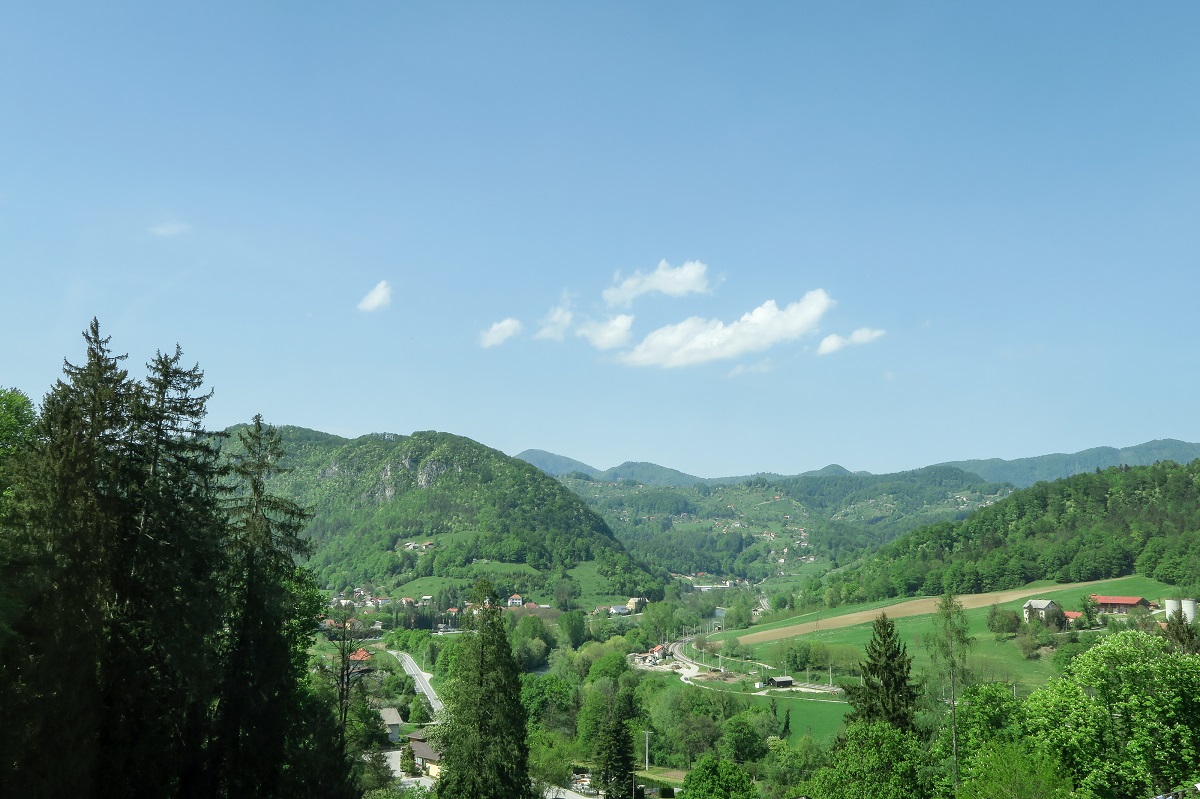 A party at the Atlantida Boutique Hotel

Villach, Christmas markets and 10 things to do!