As you walk around Trieste you don’t always notice how many Liberty style buildings there are. Often it’s easier to notice the imposing neoclassic or eclectic style which tower over the streets and which are very common in Trieste. Liberty architecture in Trieste (known as Art Nouveau in English) was mostly used on residential buildings and almost inexistent in any other type of building in town. Liberty style in Trieste was experienced almost as a political movement: the irredentists were more connected to Italy and saw this style as frivolous and typical of a city of the Austro-Hungarian empire. On the other hand, many people looked to Vienna and the Mitteleuropa and the new styles of the period.

The Art Nouveau itinerary in Trieste will take you to some areas which are less central, residential areas you would visit only if interested in something particular, but it’s worth walking a little more to admire some hidden beauty.

Liberty (or Art Nouveau): is a style of art which was popular between the end of the 1800 and the beginning of the 1900 and uses curved and soft lines, natural decorations inspired by flowers and plants as well as by Oriental art. The same style, with slight differences, has different names in many countries: Art Nouveau in France, Modern Style in England, Jugendstil in Austria e Germany.

My itinerary starts from Via San Giorgio 5. Very close to Museo Revoltella, there’s a building that has attracted my attention only recently. It’s a building on a corner of the street, painted bright orange with beautiful windows with red wooden frames. It was built in 1903 by the architect Eugenio Geiringer. The entire building is decorated with wreaths, medallions and floral decorations. 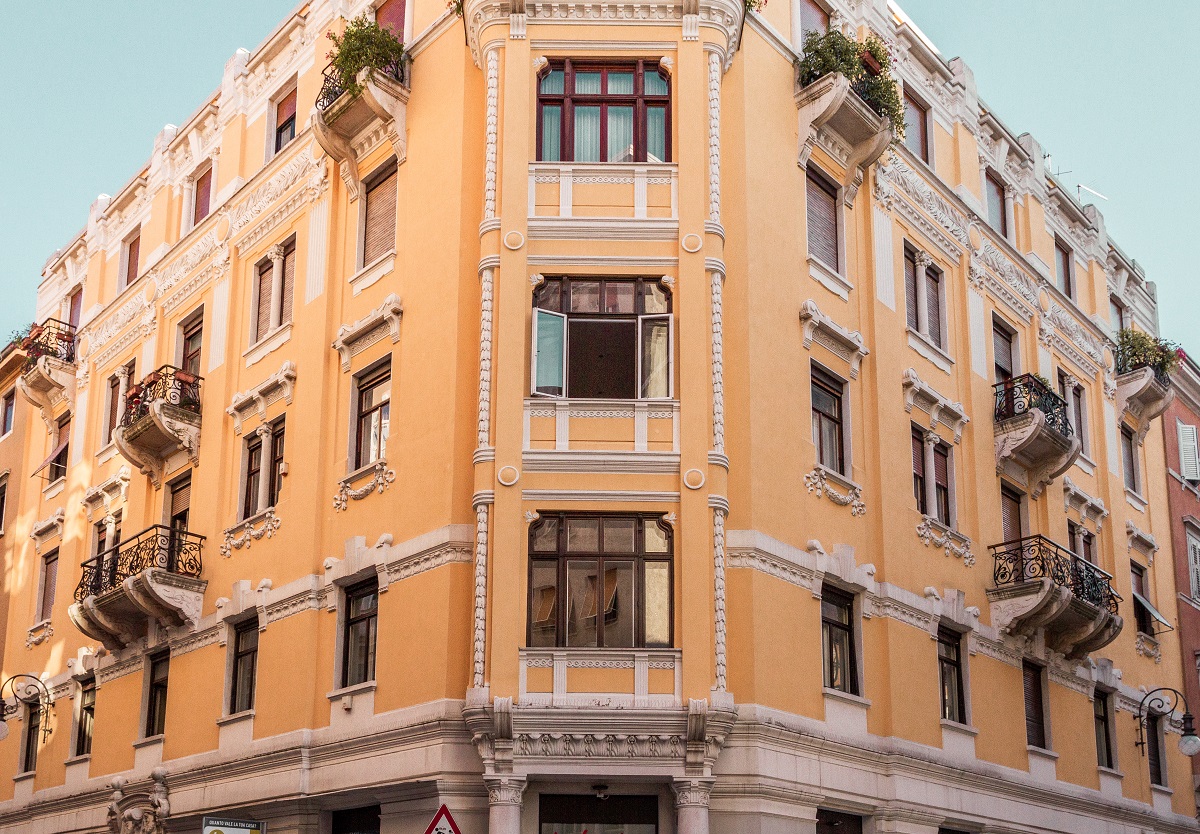 The house of masques

To reach this building you have to walk a little. The address is via Tigor 12, and it hides a Liberty treasure which is not well known even to local residents. If you decide to walk all the way up here, I suggest you be patient and wait for someone from the building to let you into the courtyard because through the large iron gates there’s quite a sight. I’ve been here twice, and I’ve always bumped into very kind people who let me in to take a few pictures and also gave me some extra information about the building.

The building unfortunately is in terrible conditions, but they’re planning to renovate the exterior soon, while the inside needs special work, so they still haven’t planned the renovations. Still, the building is rather fascinating and is well worth a visit. 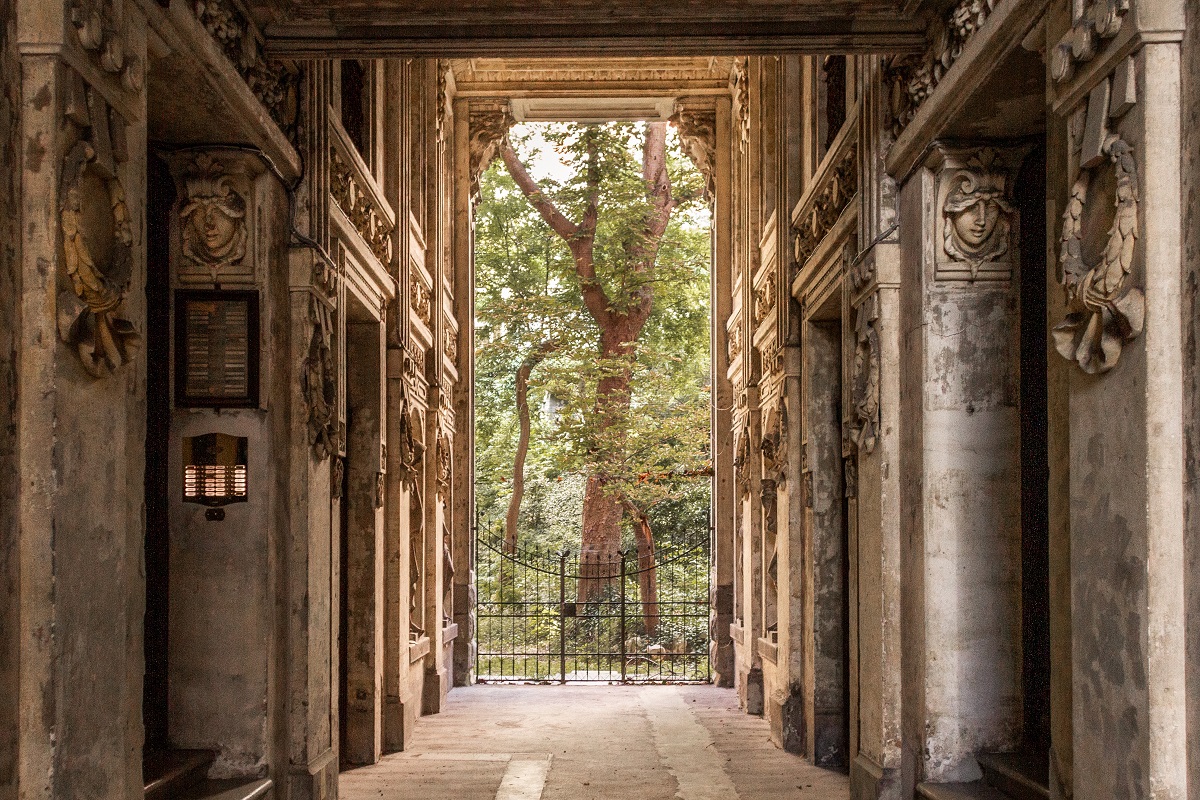 If you head back towards the center, in piazza della Borsa you’ll see the beautiful Bartoli house, which is commonly called the Green house. It was built in 1905 by Max Fabiani and it’s covered in floral decorations and beautiful green iron balconies.

Even at the time the lower floors were for shops, just like they are today. The veranda you’ll see above the shops was used as a winter garden of a kosher restaurant, which was very popular at the time, but was shut down in the 1930s. 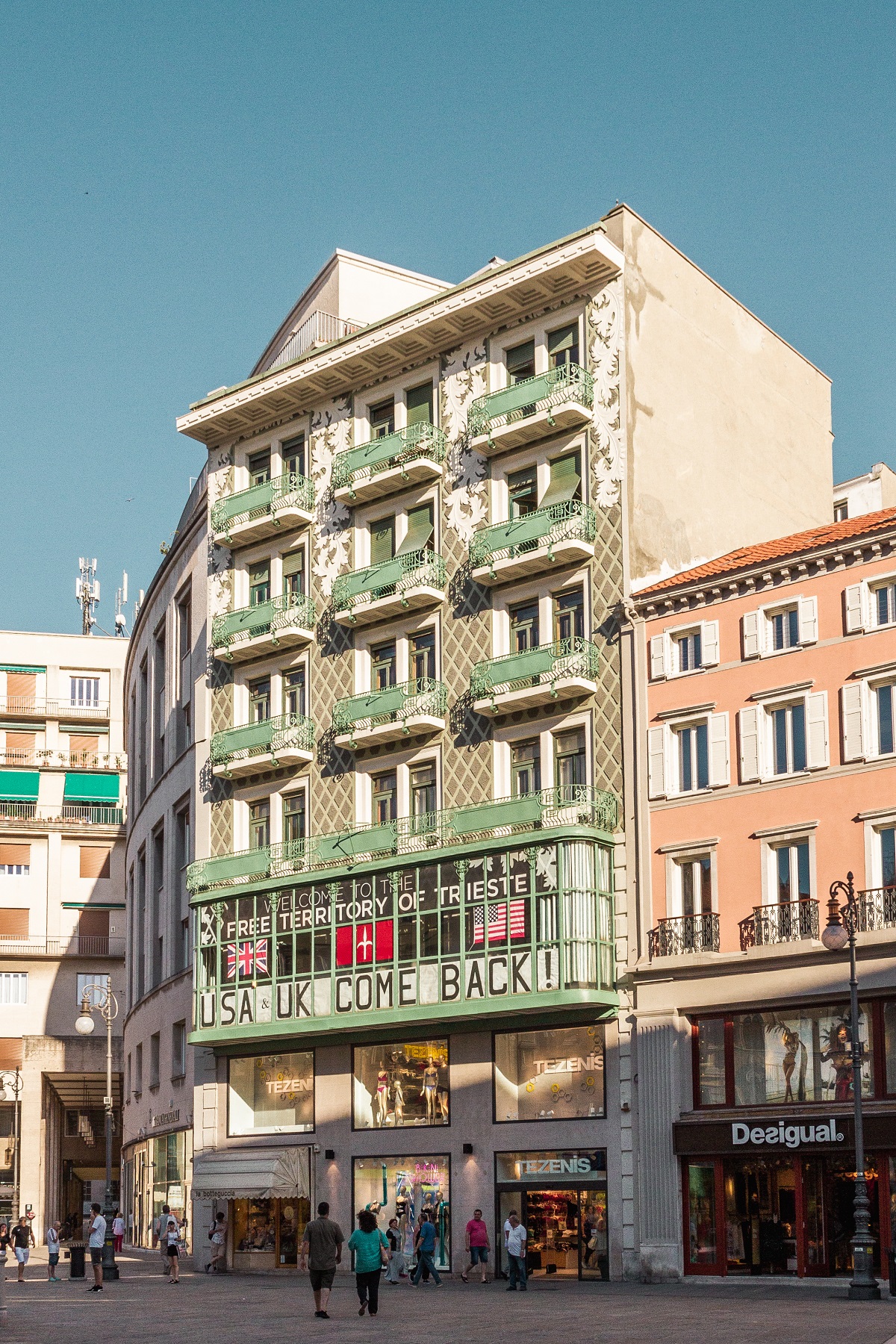 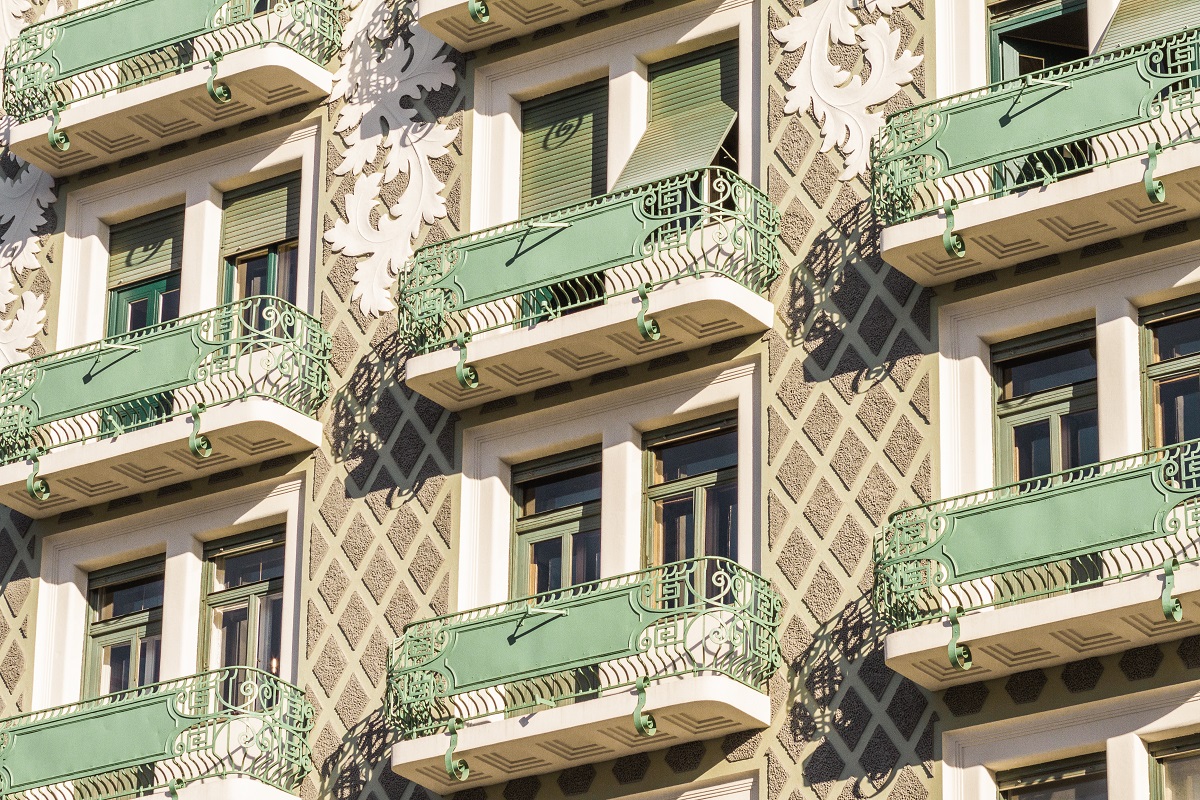 I head towards the pedestrian area to have a look at the most well known Liberty building in Trieste. I’m in via Dante Alighieri 8, and it’s impossible to not look up to the beautiful façade of the Casa Terni. I look up to it every time I pass by. The building was planned by the architect Romeo Depaoli in 1906 while the sculptures, which are very distinctive, were the creation of Paolo Rathmann.

A curiosity: Casa Terni is also called Casa Smolars because on the ground floor there was the first shop of the famous stationary shop which was still working until a few years ago, in the new venue in via Roma. 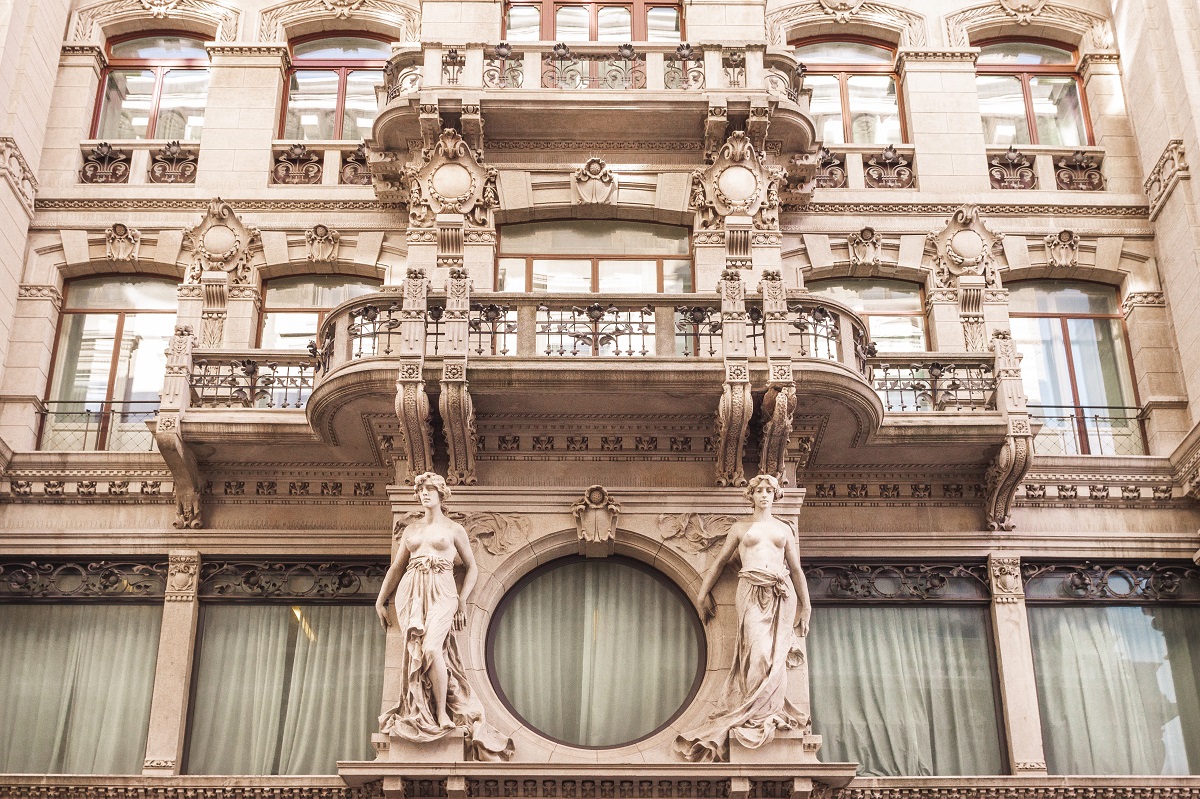 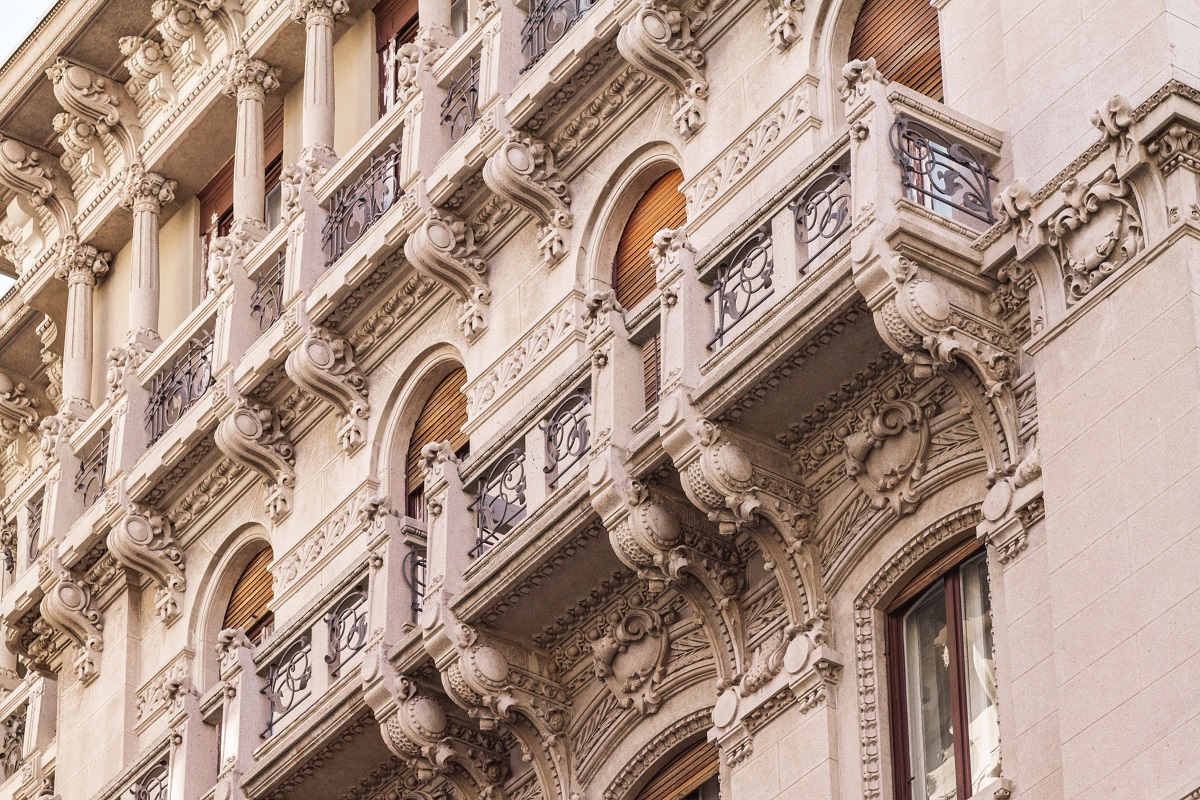 Casa Polacco and the Upim building

If we stay in the same area, and walk up Corso Italia from piazza della Borsa, you’ll notice a building where the Upim store is located. The Liberty decorations are on the lower part of it and are the work of the painter Pietro Lucano from Trieste. A little further up you’ll find the Casa Polacco, which get its name from Mrs Gisella Polacco who commissioned it. Exactly like for Casa Terni, the architect Depaoli and the artist Rathmann worked together. They say (but I can’t guarantee the truth of the rumor) that the two sculptures of thr women above the building resemble the artist’s lovers. 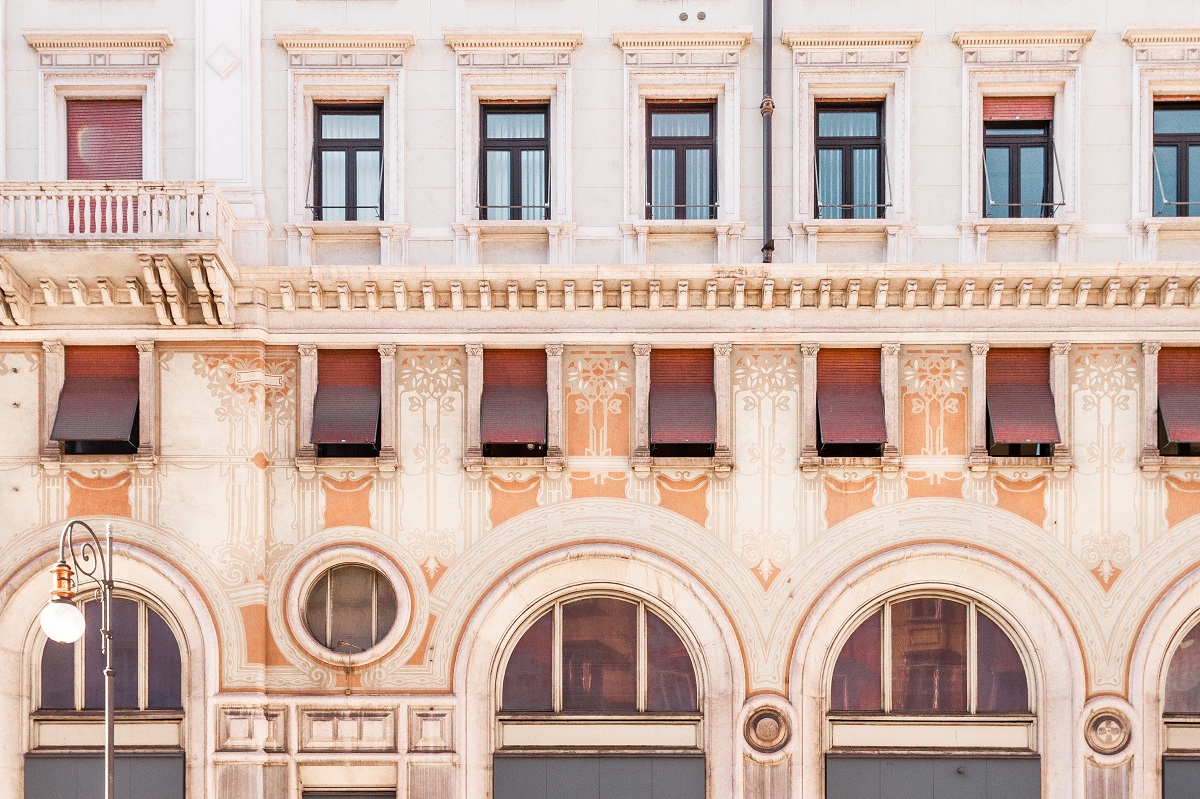 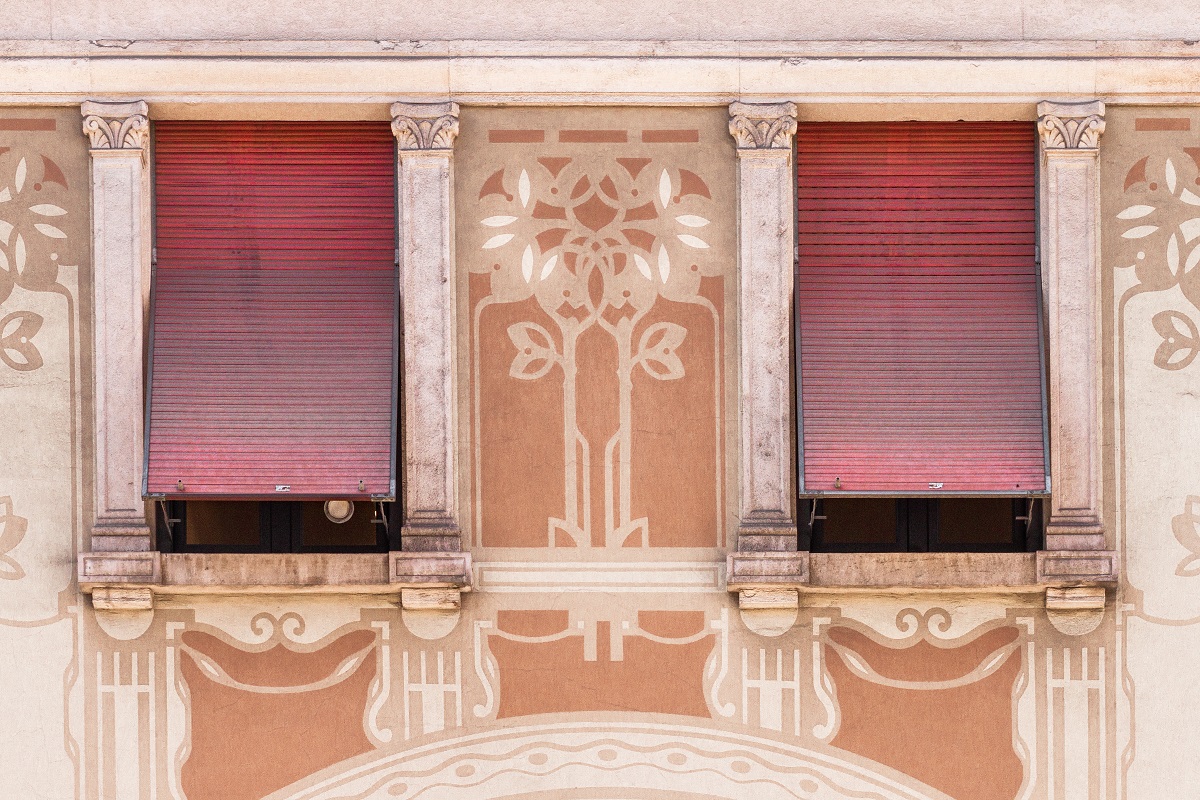 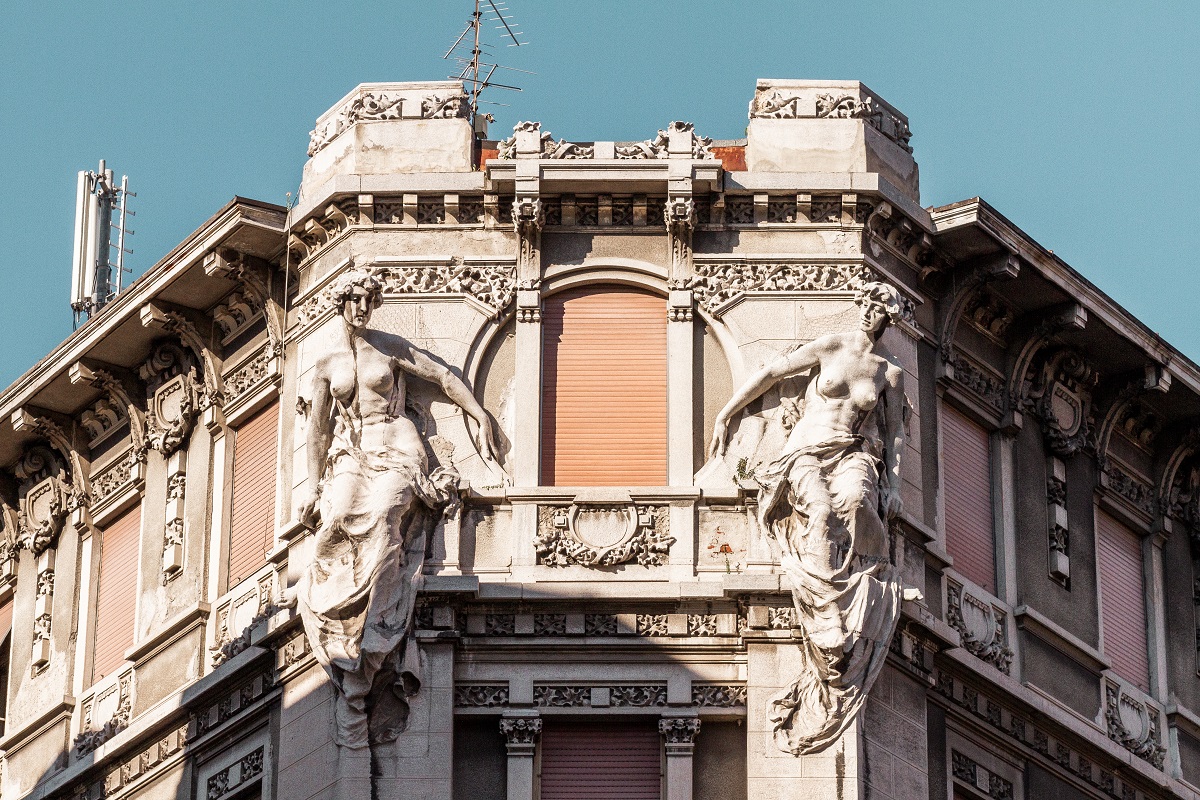 Ambasciatori Cinema and via Giulia

I head along Viale XX Settembre, where it’s always nice to take a walk, and reach n. 35 where we find the Ambasciatori cinema. When it was built initially it was supposed to be a theatre. Unfortunately, all he interiors and furnishing were destroyed when it was turned into a cinema in 1951. The exterior wasn’t changed, with its large sculptures, always designed by Rathman.

If you keep walking in the same direction you’ll reach Via Giulia, and at the corner with Via Galileo Galilei there’s another Liberty building. It might need a little renovation, but the decorations it has are surprising. 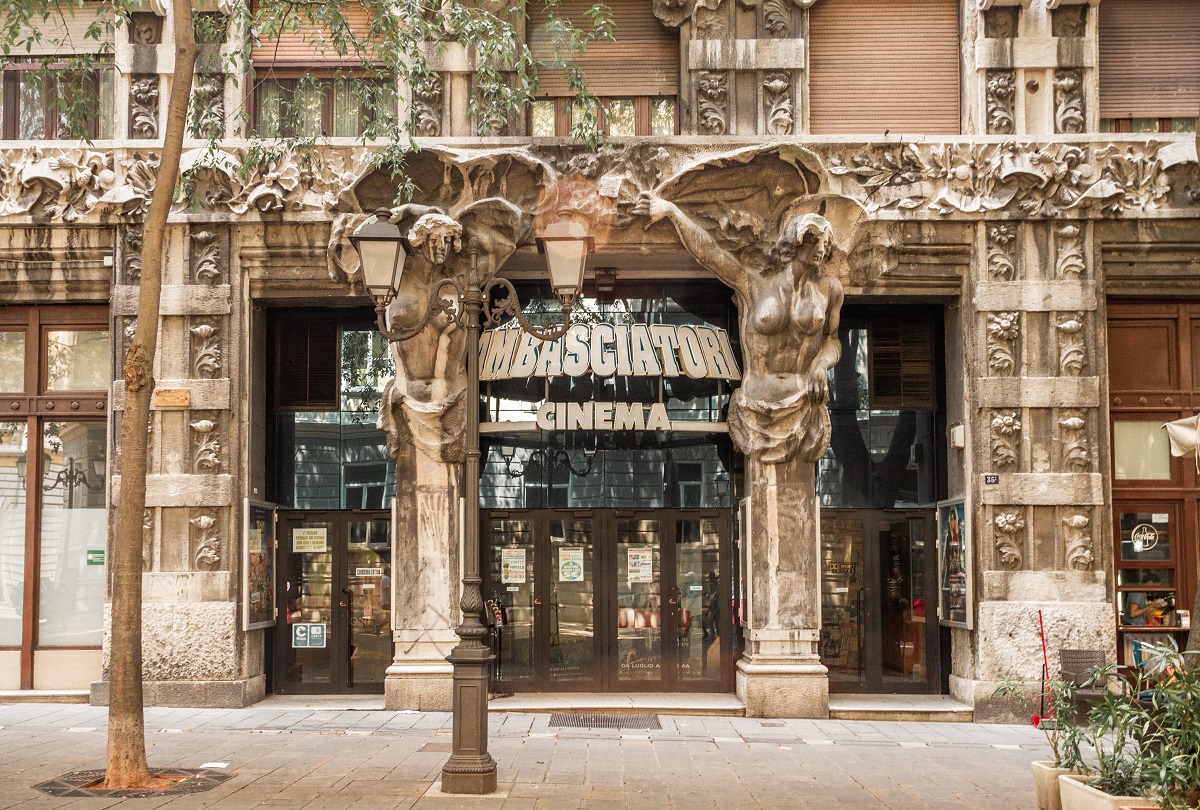 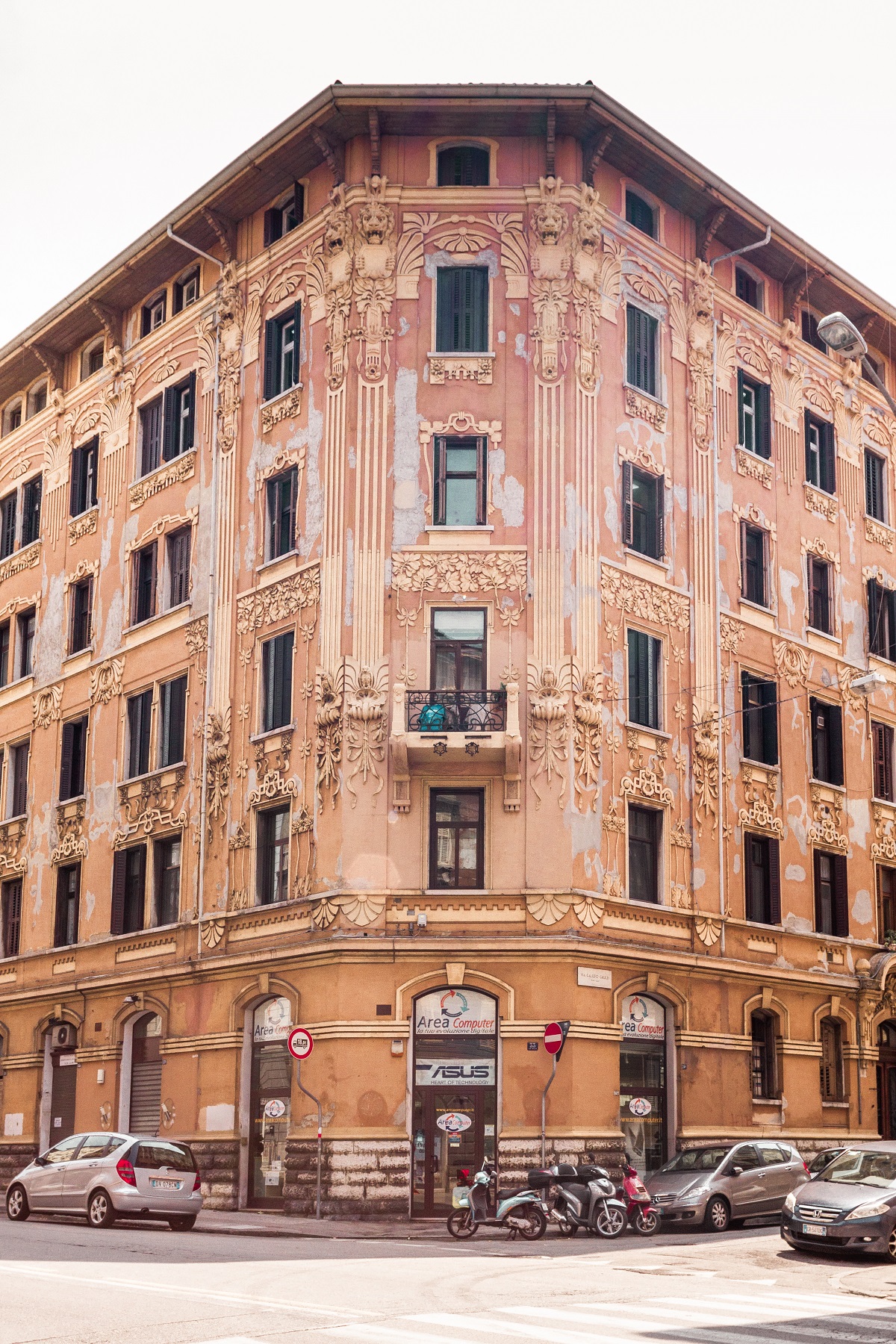 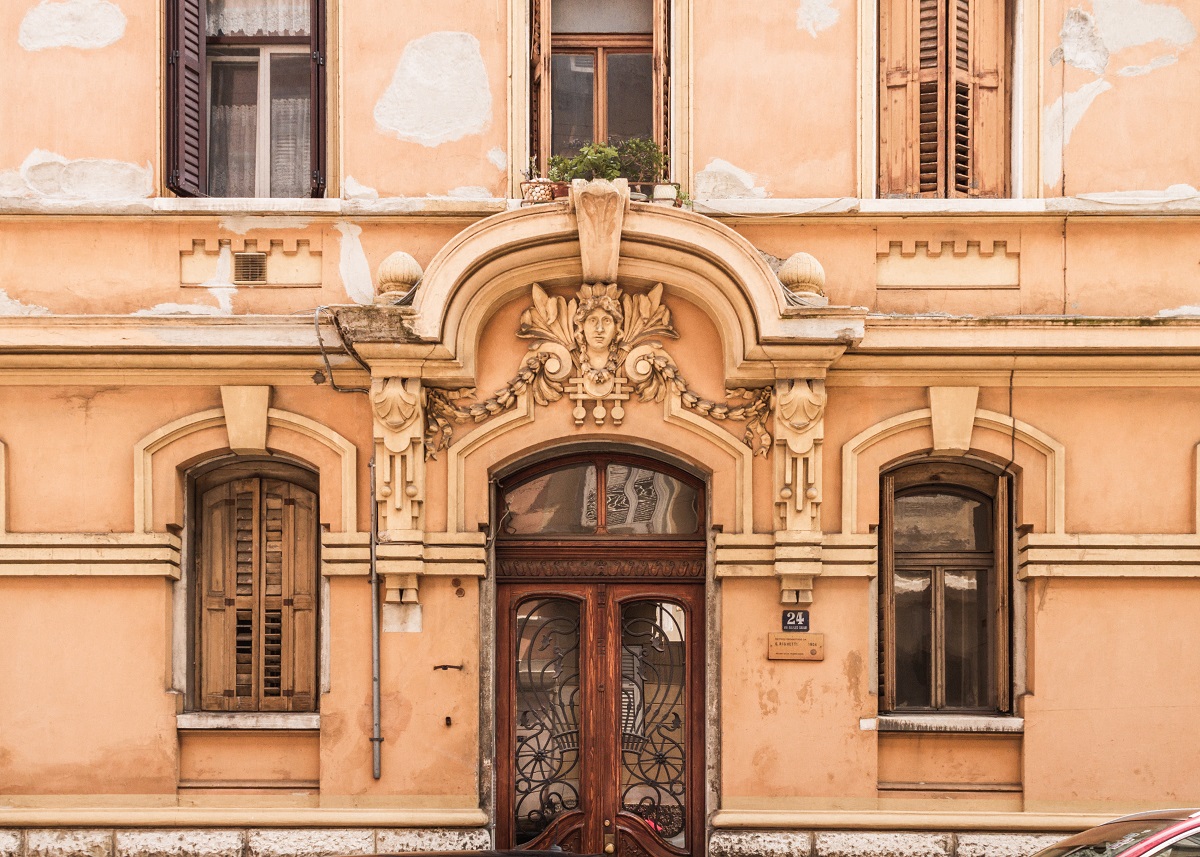 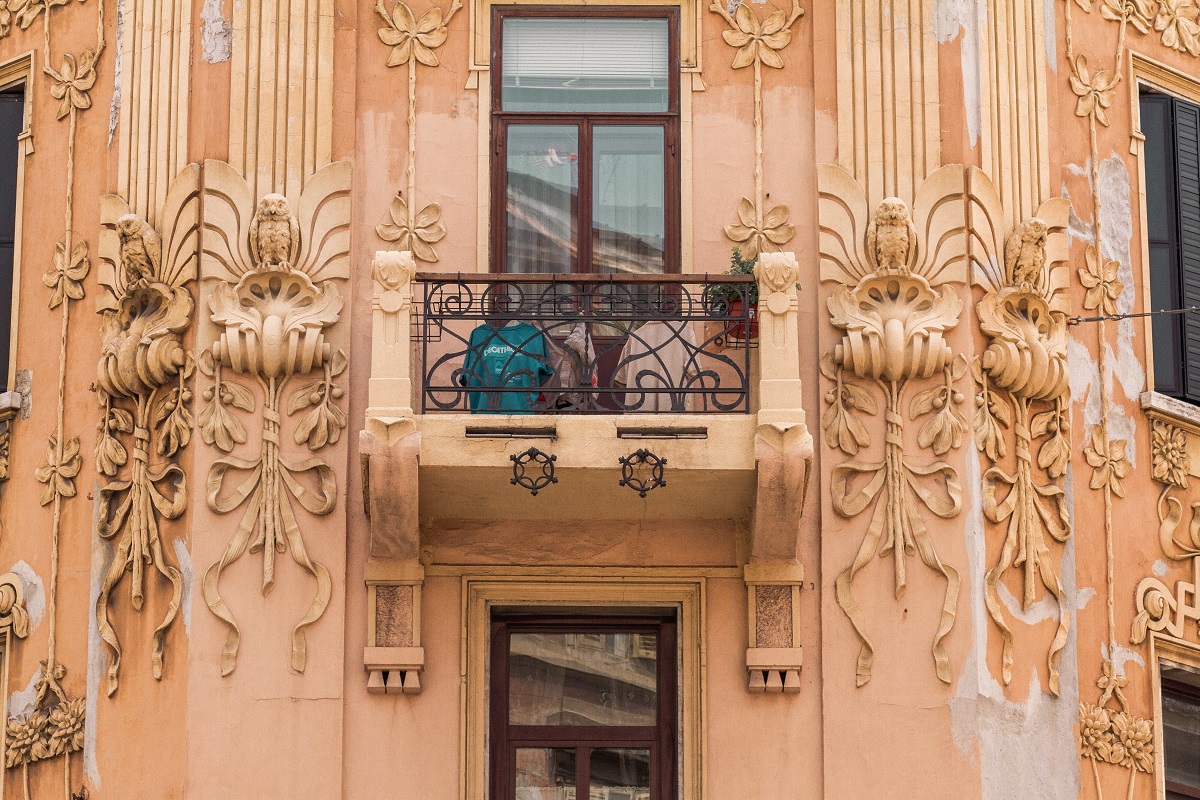 You need to walk quite a bit to reach via Commericale, the last stop in our itinerary. The lower part of this steep road hosts a concentration of Liberty buildings. Just walk with your nose in the air to discover the details of incredible decorations. Floral ornaments, colored glass doors, colorful frescos and statues of fauns and nymphs. A walk that is well worth taking. 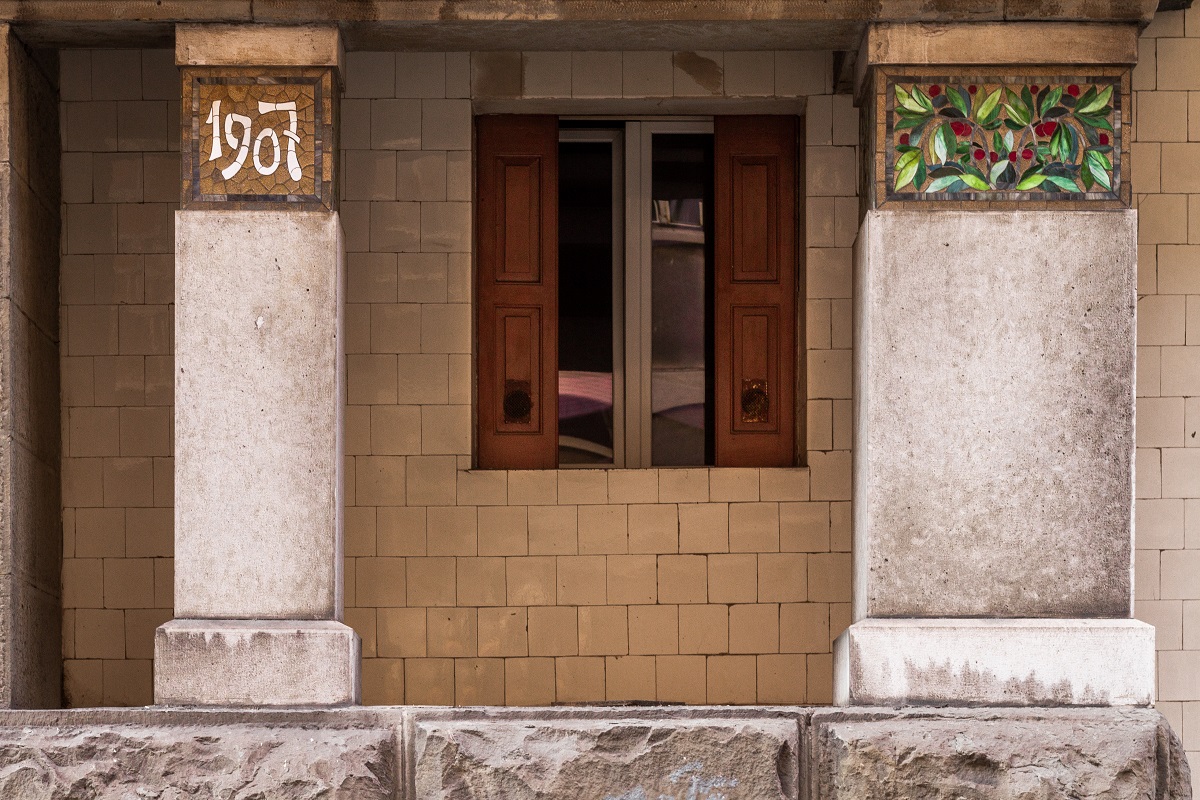 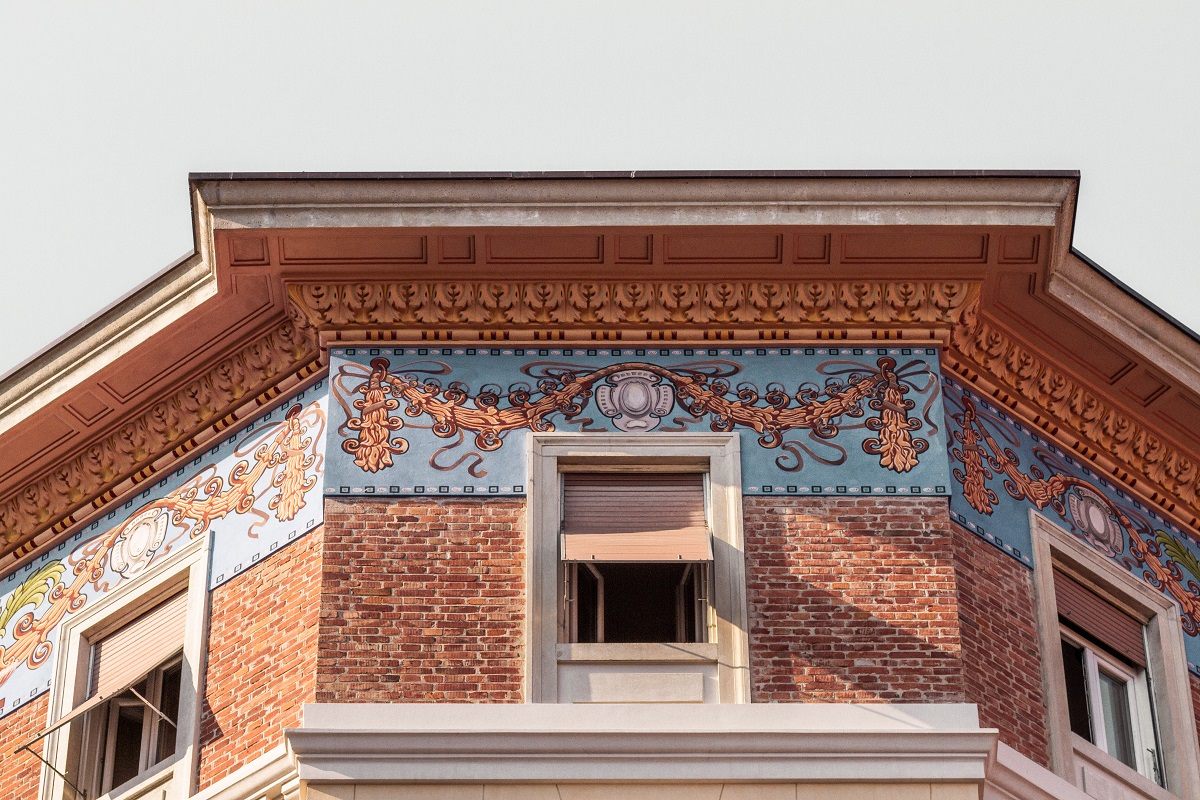 Portopiccolo SPA, the perfect place for wellness and relaxation